S Korea's Moon in Pyongyang for much-anticipated summit with Kim 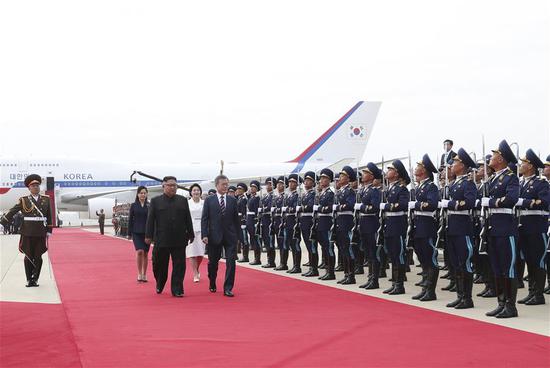 Moon stepped out of the plane in the morning to a smiling Kim and a grand welcome ceremony, an obvious gesture of goodwill from the DPRK side amid mixed prospects for the denuclearization talks between the DPRK and the United States.

Moon has said that one of the main aims of his visit is to revive the stalled DPRK-U.S. talks on denuclearization, but observers are divided over the prospects for dialogue on the peninsula.

Nevertheless, the economic side of the summit on Tuesday offers hope for concrete results, which could potentially be a good starting point for injecting fresh momentum into the peace talks on the peninsula.

Kim said in his introductory remarks that he felt he and Moon had become very close. Moon said "the spring of Panmunjom became the fall of Pyongyang," referring to the place of their three meetings this year, South Korean media reports said.

Moon is the first head of state from South Korea to visit Pyongyang in 11 years. They had met for the first time on April 27 at the truce village of Panmunjom on the border, followed by a second surprise summit on May 26.

The summit on Tuesday was marked by obvious gestures of goodwill as a smiling Kim and his wife Ri Sol Ju showed up at the airport to welcome the visiting South Korean president and first lady Kim Jung-sook.

Moon landed in Pyongyang at around 10 a.m. local time (0100 GMT). A cheering crowd waved flowers, DPRK national flags and the unified flag for the Korean Peninsula, which features a map of the whole peninsula.

"Warm welcome to President Moon Jae-in on his visit to Pyongyang," a banner in the background read.

The two leaders greeted each other with a hug and inspected the ceremonial guards before leaving together for the Baekhwawon State Guest House in a black sedan. They waved to the people lining up on the side of the road to welcome Moon upon his arrival, which was broadcast live in South Korea.

On the sidelines of the summit, Kim Yong Nam, president of the Presidium of the Supreme People's Assembly, met with South Korean ministers and senior officials as well as some of the business executives in Moon's entourage.

The first ladies of the two Koreas visited a children's hospital and a music college in Pyongyang in the afternoon.

The official Korean Central News Agency (KCNA) said that the Pyongyang summit aims to implement the Panmunjom Declaration issued after the first inter-Korean summit in April.

The Pyongyang summit "will offer an important opportunity in further accelerating the development of inter-Korea relations that is making a new history," the KCNA said.

Before leaving for Pyongyang, Moon said he planned to have a lot of frank talks with Kim in order to bring "irreversible, permanent peace to the Korean Peninsula" and help restart the DPRK-U.S. dialogue.

Kim met with U.S. President Donald Trump in Singapore in June and said that they would try to work towards the denuclearization of the peninsula, but recently the talks have been in a stalemate. U.S. Secretary of State Mike Pompeo cancelled a planned trip to the DPRK, citing lack of progress.

The official Rodong Sinmun on Tuesday said in a commentary that the United States is totally to blame for the deadlock by "stubbornly insisting on the theory of 'dismantlement of nukes first' which was rejected in the past DPRK-U.S. dialogues."

Instead, the United States should have an honest and diligent attitude toward the dialogue, it said.

Observers said that it would be a gesture of goodwill if the two sides could reach a consensus on military issues, even though it may still be challenging for the two sides to achieve breakthroughs without a substantial change in the approach of the United States.

Separately, a Chinese envoy to the United Nations said Monday that positive changes have occurred on the Korean Peninsula, which is good for a political settlement of related issues. "The situation is now on the correct track of dialogue towards political settlement," said Chinese Ambassador to the United Nations Ma Zhaoxu at a Security Council meeting.

Wang Peng, associate research fellow at the Chongyang Institute for Financial Studies, Renmin University of China, highlighted the economic aspect of the summit as a potentially easier starting point.

"It's the easiest to start with the economic cooperations and produce concrete results there and then work towards other goals, since they would be helpful in building political trust and raise the prospects for peace on the peninsula," Wang said in an interview with Xinhua.

Moon came with an entourage of about 150, including presidential secretaries, cabinet members, lawmakers, business leaders and representatives of the cultural sector.

Significantly, Moon's delegation includes some of South Korea's most prominent business leaders, including those from the conglomerates Samsung, LG and Hyundai. This is seen as a follow-up on the economic part of their previous talks, which resonates with Pyongyang's decision in April to carry out strategic economic construction.