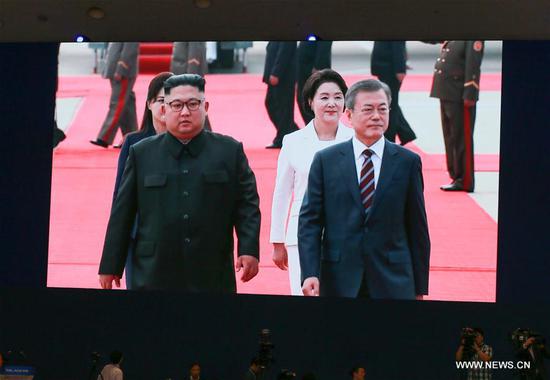 Moon, who arrived at 10 a.m. local time (0100 GMT), is here for the third inter-Korean summit this year. Both of the two previous summits took place in the truce village of Panmunjom.

Kim and his wife Ri Sol Ju stepped out of an airport building to greet Moon as the plane landed. Several DPRK officials were already waiting beside the aircraft.

Kim and Moon hugged each other and shook hands as the South Korean president got off the plane, together with his wife Kim Jung-sook.

Moon has an entourage of over 150 members, including presidential secretaries, cabinet members, lawmakers, business leaders and representatives of the culture sector.

The South Korean first couple were presented with flowers by two DPRK children, before shaking hands with senior DPRK officials waiting for his arrival.

The DPRK officials included Kim Yo Jong, the younger sister of the DPRK leader and the first vice department director of the Central Committee of the ruling Worker's Party of Korea (WPK).

Moon and Kim inspected the guards of honor and greeted the welcoming crowd waving DPRK national flags and the white-and-blue peninsula flags.

After the welcoming ceremony, Moon left in a black sedan for the Baekhwawon State Guest House in Pyongyang.

Moon is scheduled to stay in Pyongyang till Thursday. Moon and Kim met for the first time on April 27 at the truce village of Panmunjom and had their second summit on May 26 there.

Moon's visit to Pyongyang is the first by a South Korean head of state in 11 years.