CCDI: For fugitive, it's best to give yourself up 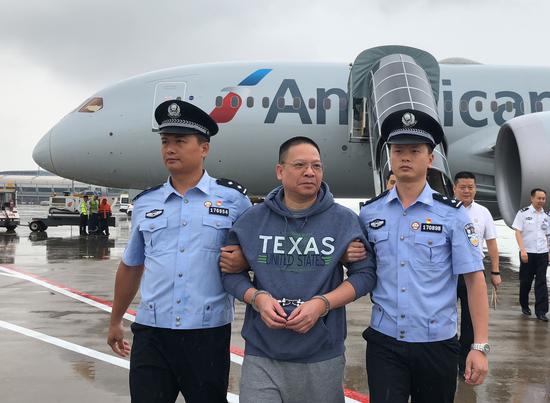 Xu Chaofan, former head of a Bank of China subbranch who fled to the US, arrives in Beijing on July 11, 2018. (Photo/Xinhua)

Chinese fugitives overseas who fled crimes committed during employment in China will receive more lenient punishments if they turn themselves in by year's end, China's top disciplinary body said on Thursday.

Occupational crimes range from theft of an employer's property to misuse of sensitive information for personnel gain.

The new rule aims to give suspects who know they are guilty a chance to redeem themselves and qualify for leniency, the Central Commission for Discipline Inspection said online on Thursday.

Those who want to turn themselves in can report their crimes to Chinese authorities-inspection organs, police, procuratorates, courts or other agencies. They can also report to Chinese embassies or consulates abroad, who will pass on the information to the appropriate domestic authorities, the rule said.

Those who confess their crimes truthfully will be eligible for lighter punishment. In addition, those who voluntarily return their ill-gotten gains, or who help crime victims recover their losses, will receive a lighter punishment. If the crime is petty, it's possible that the penalty can be eliminated.

Fugitives can report their decision to surrender either personally or through a representative. However, they must return to China and accept the processes of the agencies related to their cases to count as legitimate turn-ins for reduced punishment.

Fugitives who provide valid information to help solve cases or capture other criminals will be granted leniency in accordance with law. Those who contribute greatly can even be exempted from punishment.

The CCDI urged fugitives overseas to clearly evaluate their situation, cherish the opportunity and swiftly turn themselves in.

Those who fail to surrender voluntarily within the period and are later repatriated will be severely punished, it said. At the same time, those who illegally help fugitives by destroying evidence, transferring ill-gotten gains or hiding a person's whereabouts will also face criminal charges.

To encourage and protect the public and organizations that report crimes, authorities will reward those who provide valid clues or help fugitives return. The authorities will also strictly protect informants' personnel information, and punish those who illegally harass or retaliate against whistleblowers.