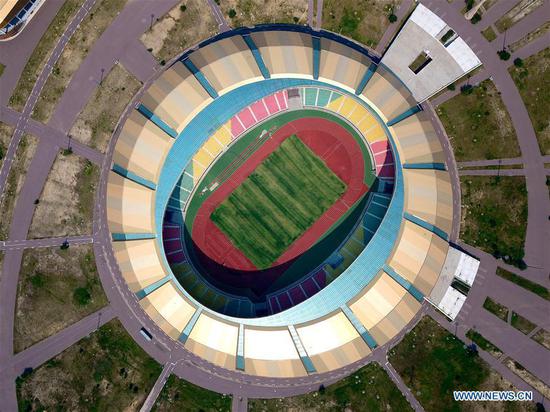 Aerial photo taken on June 10, 2018 shows the Sports Center built with Chinese assistance in Brazzaville, capital of Republic of Congo. In the past five years, China and African nations have deepened political mutual trust, mutual assistance in development and mutual learning in visions, and made concerted efforts in building the Belt and Road and a closer China-Africa community with a shared future. (Photo/Xinhua)

From the Horn of Africa all the way south to the Cape of Good Hope in South Africa, is an extensive stretch of thousands of kilometers of the West Indian Ocean coastline.

More than 600 years have passed since those first voyages. This region now boasts some of Africa's fastest growing economies, which seek to boost regional integration with better infrastructure through cooperation under the China-proposed Belt and Road Initiative.

The China-Africa cooperative projects such as the electrified railway connecting landlocked Ethiopia with Djibouti, the Mombasa-Nairobi standard gauge railway in Kenya, the Maputo Cross-sea Bridge in Mozambique and various industrial zones established in recent years, have been a reflection of the successful cooperation under the Belt and Road Initiative.

Proposed by China in 2013, the Belt and Road Initiative refers to the Silk Road Economic Belt and the 21st Century Maritime Silk Road, which aims at building a trade and infrastructure network connecting Asia with Europe and Africa along the ancient trade routes of the Silk Road.

An open and inclusive platform for economic cooperation between nations and governments, the initiative has helped change people's lives.

Tesfay, 38, used to be a taxi driver in the Ethiopian capital Addis Ababa with an income that could barely support his family.

"Actually, I have always had this dream of owning a house in Addis Ababa," he said.

Yet compared with the average salary of a local employee, the housing price is simply too high for him to realize his dream.

Because of his driving skill and extensive knowledge of the city, he was employed six years ago by the China Railway Group (CREC), one of the contractors of the Ethiopia-Djibouti railway.

"Tesfay was just the kind of guy we needed when we first arrived in Addis Ababa years ago, when streets in the city barely had names and houses did not have doorplate numbers. He was a walking map of the city," said Yuan Qiang, an expert with CREC No.2 Group at the project for operation and maintenance.

With help from the project and his Chinese colleagues, Tesfay finally managed to buy his dream house in the city with a down payment four years ago.

"The price of the house has now even gone up quite a lot, which equals to many years of my salary," said Tesfay.

Examples of African workers benefitting from various projects under the Belt and Road Initiative abound.

The Nairobi-Mombasa railway project has created nearly 50,000 jobs for locals, and trained more than 5,000 technicians since construction began in late 2014. The Maputo Cross-Sea Bridge, due to be launched soon, has also created over 20,000 jobs for the locals, both full-time and part-time, since the project commenced in June 2014, data from the China Road and Bridge Corporation showed.

As the Belt and Road Initiative seeks to promote connectivity among nations, more African countries are eager to know how they could benefit from it as they strive to promote regional integration through upgrading roads, ports, railways and telecommunication networks.

In June, officials, scholars, and think tanks gathered in Kenya for a case study of the Nairobi-Mombasa railway, a pioneer project of the Belt and Road Initiative in East Africa.

James Macharia, Kenya's Cabinet Secretary for the Ministry of Transport, said the project is a model for cooperation with China in infrastructure development and socio-economic transformation.

Describing the project a game changer, Macharia said that the extension of the modern railway project toward the border with Uganda will stimulate trade and industrialization along its corridor.

Gerishon Ikiara, an international economics lecturer at the University of Nairobi, said that the China-proposed initiative and the BRICS Development Bank have enriched cooperation among countries and regions, and have been important engines for global economic growth.

The Maritime Silk Road connects east Africa with Asia and Europe, and the extension of standard gauge railways in east Africa will greatly improve the region's transport and reduce trade costs, he said.

Chinese Ambassador to South Africa Lin Songtian said earlier that Africa is an important destination for the Belt and Road Initiative.

"The construction of the projects under the initiative will bring unprecedented new opportunities for China-Africa cooperation," he said.

This year marks the fifth anniversary since the Belt and Road Initiative was first put forward in 2013.

Over the years, after some nations in East Africa have taken their first steps to boost domestic development under the initiative, countries in West Africa, including Nigeria, Mauritania, and Cote d'Ivoire have expressed interest in joining in the Belt and Road construction.

Nigeria's newspaper Leadership published a full-page article last month, which urged Nigeria, Africa's largest economy and most populous country, to take a stand and make itself a key player to attract this initiative to its shores.

"In Nigeria, China is doing quite well. The Abuja-Kaduna railway, the Abuja light rail from the city center to airport, among other projects, are all in spirit of the Belt and Road," the article said.

African leaders will gather this September in Beijing for the Forum on China-Africa Cooperation (FOCAC) summit, and it is expected that the Belt and Road Initiative is going to be a major topic.

Zimbabwean President Emmerson Mnangagwa said earlier this year that Zimbabwe will fully participate in the initiative for the benefit of its economy.

"The Belt and Road Initiative is indeed a vision for the future," Mnangagwa said.

Tanzania's Minister of Foreign Affairs Augustine Mahiga told Xinhua that the philosophy of the Belt and Road Initiative is to open economic opportunities, to give the countries worldwide better access to resources, technology, and to have closer connectivity.

"That is the essence of the connectivity of the world economy. If you want another word for Belt and Road, it is user-friendly globalization of the economy," he added.