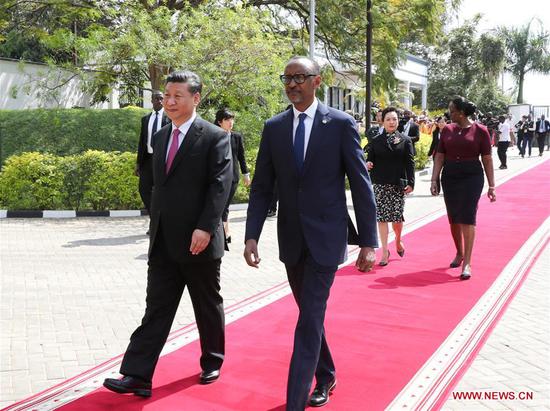 In their talks, the two leaders also spoke highly of the growth of bilateral ties over the past 47 years since their countries established diplomatic relations.

Xi recalled his meeting with Kagame in Beijing in March 2017, during which they reached extensive consensus on promoting bilateral relations and friendly cooperation and brought China-Rwanda ties to a fast track of development.

Beijing is willing to work with Kigali to translate their traditional friendship into concrete benefits for the two countries and the two peoples, and open a new chapter in their friendly cooperative relations, Xi said.

China and Rwanda, Xi stressed, should view their ties from a strategic height and long-term perspective, firmly support each other independently choosing their own development paths, and keep mutual understanding and support on issues related to each other's core interests and major concerns.

Xi called on the two countries to strengthen the link between their respective development strategies, give full play to their complementary advantages, and carry out pragmatic cooperation in more areas and at deeper levels.

China welcomes Rwanda's participation in the international cooperation within the framework of the Belt and Road Initiative, and encourages more Chinese investment in Rwanda to help advance the African country's industrialization and modernization, Xi said.

Xi asked the two sides to strengthen people-to-people exchanges, so as to bring closer the hearts of the two peoples and consolidate the social and public support for the future development of their friendship.

The two sides, he suggested, also need to deepen law enforcement and security cooperation, maintain close coordination on international and regional issues, and strengthen collaboration on issues of global significance, so as to safeguard the common interests of African countries and developing countries.

Over the past several decades, China-Africa relations have always been defined by sincere friendship, unity and cooperation, Xi noted, pointing out that the two sides have become a community with a shared future going through thick and thin together as well as a community with shared interests dedicated to win-win cooperation.

Strengthening unity and cooperation with African countries is an important foundation for China's foreign policy and a long-term steadfast strategic choice of Beijing, Xi said.

He compared Africa to a galloping lion, saying that China is glad to see a stronger Africa that is increasingly integrated.

Calling the African Union (AU) a banner guiding African countries to solidarity and cooperation, Xi said China always supports the AU playing a leading role in promoting peace and development of Africa and playing a bigger role in regional and global affairs.

China, he added, is willing to elevate the strategic significance of its relationship with the AU, set it as an example and make it more effective, so as to bring more benefits to the Chinese and African people.

Kagame, for his part, called China a reliable friend who shares weal and woe with Africa. He said it is of great importance for Rwanda and Africa to develop friendly ties with China.

He spoke highly of China's valuable assistance for Rwanda in such areas as infrastructure construction, agriculture and education, adding that China's helping hand has made positive contributions to his country's reconstruction and livelihood improvement.

The Rwandan president also expressed his hope to strengthen exchanges with China on state governance and deepen win-win cooperation on bilateral as well as multilateral platforms.

Rwanda is willing to enhance cooperation with China within the framework of the Belt and Road Initiative, which offers a significant opportunity for both Rwanda and Africa, Kagame said.

As the AU's rotating chairman, Kagame stressed that China's long-standing firm support is of great value to Africa's development.

Africa places great importance on China's role in international affairs and is committed to further deepening their friendship and mutually beneficial cooperation, he added.

The African side, he said, looks forward to attending the Beijing summit of the Forum on China-Africa Cooperation (FOCAC) in September, and stands ready to jointly push forward the development of FOCAC, so as to generate more benefits for the people of both sides.

After their talks, the two heads of state witnessed the signing of multiple agreements on bilateral cooperation in the Belt and Road Initiative and other areas. They also met the press together.

Prior to the meeting, the Rwandan president held a grand welcome ceremony for Xi, who arrived in Kigali on Sunday for the first state visit to the African country by a Chinese head of state.

Xi inspected the guard of honor in the company of Kagame. A group of Rwandan well-wishers, dressed in traditional clothes, staged a dancing and drumming performance to express their joy and excitement.

Later in the day, Xi and his wife, Peng Liyuan, visited the Kigali Genocide Memorial.

Rwanda is the third leg of Xi's first overseas visit after he was re-elected Chinese president in March. The trip has already taken him to the United Arab Emirates and Senegal, and will also take him to South Africa for a state visit and the 10th BRICS summit, and to Mauritius during a stopover.