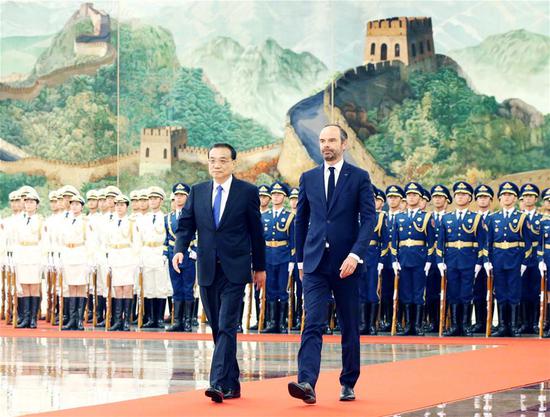 Chinese Premier Li Keqiang (L) holds a welcoming ceremony for French Prime Minister Edouard Philippe prior to their talks at the Great Hall of the People in Beijing, capital of China, June 25, 2018. (Xinhua/Yao Dawei)

China and France are both permanent members of the United Nations (UN) Security Council and major economies in the world, Li said, noting that bilateral cooperation is beneficial to the two peoples, China-Europe ties and global peace, stability and prosperity.

Li said China is willing to work with France to consolidate trust, deepen cooperation so as to build stronger and energetic comprehensive strategic partnership.

Li said pragmatic cooperation is the booster of bilateral ties, and China is willing to work with France to convert political consensus and cooperative willingness to tangible results.

China is ready to work with France to promote the synergy of strategic industries to a new stage, Li said, calling on both sides to promote major projects in nuclear energy and aerospace, support both sides to strengthen innovative cooperation in digital economy, AI and high-end manufacturing.

Both sides should enhance the facilitation in trade and investment, Li said, calling for more cooperation in agricultural food, finance, innovation and health care.

Li called for the synergy of third-market cooperation and the Belt and Road Initiative, and urged to promote the cooperation in an open and transparent manner.

Li said China is willing to strengthen cooperation with France in the fields of language culture, education, youth and museum.

China is willing to work with the European countries, including France, to safeguard the international rules based on the UN Charter, safeguard multilateralism and free trade system, and deal with global issues such as climate change, Li said.

Li expressed his hope that France, as an important member of EU, will continue its constructive role in the development of China-EU ties.

Prior to the talks, Li held a welcoming ceremony for Philippe.

After the talks, they jointly witnessed the signing of documents concerning bilateral cooperation in energy, technology, agricultural food and health care.

They also met the press on Monday afternoon, and both sides spoke highly of their pragmatic cooperation results.

China does not pursue a trade surplus, Li said, noting that economic and trade exchanges should mainly be completed by enterprises in line with market rules and business principles.

When trade friction occurs, parties concerned should have negotiations based on mutual respect, equality and win-win results, Li said.

At present, trade protectionism appears in some countries, Philippe said, calling on France and China to safeguard multilateralism and free trade together.