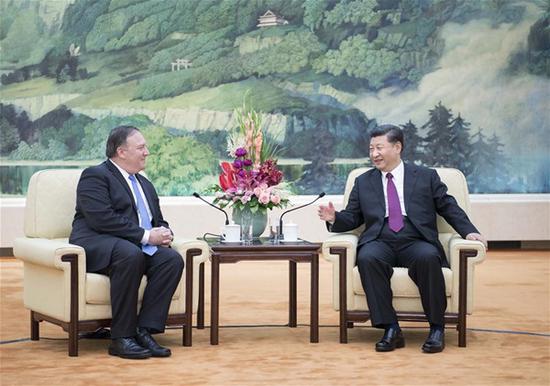 President Xi Jinping met with U.S. Secretary of State Mike Pompeo at the Great Hall of the People in Beijing Thursday.

Working together, China and the United States can make big things happen to the benefit of both countries and the whole world, Xi said. He called on the two sides to implement the consensus reached by him and U.S. President Donald Trump during their meeting in Beijing, strengthen communication, enhance mutual trust, properly handle differences, and expand cooperation so as to ensure bilateral ties will go forward along the right track to benefit the two peoples and the world.

The two countries should always view each other's strategic intentions in a correct way, and respect and take care of each other's core interests and major concerns, he said, noting that is the important lesson derived from the nearly 40 years of development of bilateral ties after they forged diplomatic ties.

The president called for more high-level exchanges and institutional dialogue, expanded cooperation in various areas, and enhanced people-to-people and local exchanges to consolidate the foundation of bilateral ties.

Xi expressed his hope that the United States will handle sensitive issues, including the Taiwan issue and economic and trade frictions, in a prudent way to avoid serious obstruction to bilateral ties.

China and the United States should strengthen communication and coordination in major international and regional issues and those with global significance, Xi said, calling on the two countries to work together in building world peace and maintaining international order.

The United States appreciates China's vital role in the political settlement of the Korean Peninsula nuclear issue, he said, adding that the United States is willing to work with China to promote realization of denuclearization and lasting peace on the peninsula.

Xi asked Pompeo to convey his greetings to President Trump. He stressed that the meeting between President Trump and Kim Jong Un, top leader of the Democratic People's Republic of Korea (DPRK), was historic, fruitful and an important step in the process of a political settlement of the peninsula nuclear issue, saying China extends heart-felt congratulations to both sides.

The issues concerning the Korean Peninsula are complex and must be resolved step by step, Xi said. China hopes the two sides respect each other, work for the shared goal and make continuous efforts to the political settlement of the issues.

China firmly adheres to denuclearization of the peninsula and its peace and stability, and insists on solving problems through dialogue, Xi said, adding that China will continue to play an active and constructive role, and work with relevant parties, including the United States, to promote the political solution of the issue.