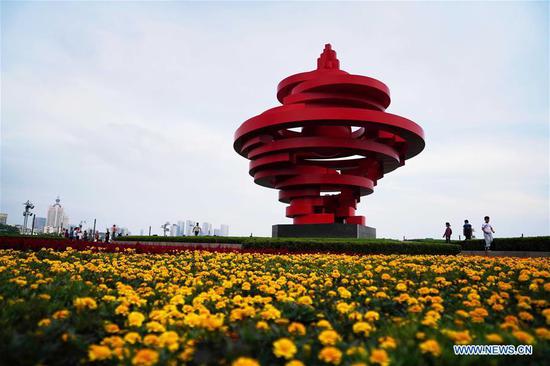 Qingdao, a coastal city famous for its beaches and beer, is ready to impress the world during the forthcoming 18th Shanghai Cooperation Organization (SCO) summit.

Local resident Shan Zhixian, 76, has been a volunteer tour guide over the past two decades. He knows the history and scenery of the city by heart. Excited about the summit, he said, "I am so proud to witness such a grand event in my hometown. People who come here for the summit will definitely be amazed by the beauty of this city."

The summit, the first after the SCO accepted India and Pakistan as full members in June 2017 , will run from June 9 to 10 and will be attended by leaders of the eight SCO member states and four observer states, as well as heads of international organizations.

With beaches, forests and European-style architecture, Qingdao is a popular tourist destination. It was ranked the most livable among 40 Chinese cities, according to a report by the Chinese Academy of Sciences in 2016.

As June begins, Qingdao becomes even more beautiful with lush trees and flowers in full blossom.

In Shinan District, where the summit venue is located, efforts have been made to improve the environment along over 20 roads and the district is now covered by 60,000 square meters of fresh flowers.

Xu Qun, head of the district's urban management department, said a series of actions have been adopted since November to make the district greener.

Local residents are also busy preparing themselves as hosts of the summit.

Lecturers from colleges, public service and volunteer groups have been teaching residents about etiquette, the SCO, and first aid.

More than 20,000 volunteers have been mobilized to offer services for the summit, from assisting with guests' arrival and departure, translation, and media requests, to the operation of city functions such as transportation, telecommunication, and banks.

The media center for the summit will open to journalists from home and abroad from June 6 to 11.

The summit will issue the Qingdao Declaration to summarize the development experience of the SCO and promote the "Shanghai Spirit" of mutual trust, mutual benefit, equality, consultation, respect for diverse civilizations, and pursuit of common development.

As an important port city on the Belt and Road, Qingdao has seen its cooperation with the SCO members strengthened over the years. In 2017, the trade volume between Qingdao and SCO member states hit 4.6 billion U.S. dollars, up 9.8 percent year on year.

Zhang Jiangting, secretary of the Qingdao Municipal Committee of the Communist Party of China, said the summit will not only boost Qingdao's tourism, trade, and exhibition industries, but also promote new growth sources and improve the quality of the city's development.

For volunteer Shan, he has more to do after the summit.

"When I introduce Qingdao to tourists in the future, I will proudly add the story about the SCO summit into my speech," he said.