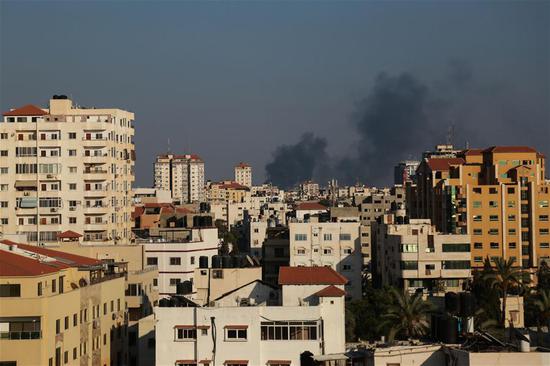 Smoke rises following an Israeli air strike on the Palestinian coastal enclave in Gaza City, on May 29, 2018. Israel launched a massive airstrike on the Gaza Strip on Tuesday, hitting 35 targets and a tunnel crossing into Egypt and Israel, said the Israeli military in a statement. The statement said the airstrike was in response to a barrage of 28 mortar shells that Gaza militants fired at Israel on Tuesday morning. (Xinhua/Stringer)

Palestinian militants fired dozens of mortars, projectiles and rockets into Israel throughout Tuesday before Israel launched a wide-scale airstrike on Gaza, as tensions rise following weeks of lethal Israeli fire at Gaza protestors.

The Israeli military said in a statement that most of the mortars, projectiles and rockets were intercepted by its Iron Dome anti-missile system.

Later on Tuesday, Israel reported that four people were injured. One of them is a civilian in his forties who was injured in his shoulder and ear by shrapnel. The other three are soldiers wounded by shrapnel outside their military position of Sufa near Gaza. One of them sustained moderate injuries and two were lightly wounded.

One of the mortars, launched early in the morning, fell in the backyard of a kindergarten in the Eshkol Regional Council in southern Israel.

Speaking to journalists, Lt. Col. Jonathan Conricus, a spokesperson for the Israeli military, said that the kindergarten was empty at the time of the attack.

"Fortunately, the attack was at seven in the morning so the kids were not there. Had the kids been there, there's no doubt they would have been injured because the yard was full of shrapnel," he said.

Within hours, Israeli fighter jets and aircrafts struck at least 35 sites in Gaza. A military statement said they were sites belonging to the Hamas, the Islamist Palestinian organization that runs Gaza, and the Palestinian Islamic Jihad, a local Islamist group that Israel blamed for Tuesday's mortar barrage.

As part of the strike, an "offensive terror tunnel" belonging to Hamas was neutralized in the area of the Kerem Shalom Crossing, near Rafah, the military said. The tunnel started within the Gaza Strip, crossed into Egypt's Sinai Desert and then continued into Israeli territory.

A media report from Gaza said the construction hit by Israel was a smuggling tunnel to transfer goods to the besieged Palestinian enclave.

According to the Israeli military, the tunnel was "dual-purposed -- designated for terror purposes, as well as to transfer munition to Egypt."

This is the second tunnel neutralized in the area of the Kerem Shalom Crossing, and the tenth since last October.

Conricus also said Tuesday's launches used Iran-made munition. "There's no doubt the Iranians are involved, the question is how much and in what volume," he said.

The military issued a statement warning that "the IDF (Israel Defense Forces) will not allow any harm to the safety of Israeli civilians or Israeli sovereignty, and will continue to operate with determination against all kinds of terror."

Civilians in the area surrounding the Gaza Strip were instructed to stay in close vicinity of shelters.

The violence followed a serious escalation in the area of the fence separating between Gaza and Israel over the past months. Israeli forces have killed at least 121 Palestinians in Gaza since weekly demonstrations started on March 30.