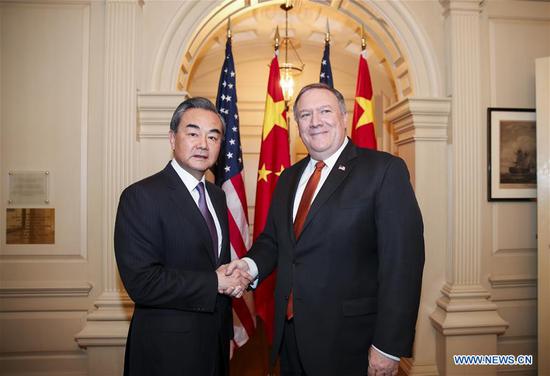 Chinese State Councilor and Foreign Minister Wang Yi on Wednesday met here with U.S. Secretary of State Mike Pompeo, with both sides pledging to promote a healthy and stable development of bilateral ties.

Wang made a stopover in Washington D.C. on his way back from Argentina on Wednesday.

Wang said he had a candid and in-depth discussion with Pompeo and both sides believe that the China-U.S. relationship is the most important bilateral relationship to each other.

Both sides highly recommend the strategic guidance of the two heads of state on the bilateral ties, and are ready to implement consensuses reached by the two presidents, including respecting each other's core interests and major concerns, and properly handling the Taiwan issue and other sensitive issues, Wang said.

The two countries should stay away from disruptions and overcome difficulties in order to promote a healthy and stable development of bilateral ties, he added.

Both sides agree that the recent intense consultations on trade issues are constructive and have achieved positive and important outcomes, Wang said.

It is important that the two sides are willing to do addition instead of reduction to ease and finally solve their trade imbalance, Wang said, adding that he hopes those consensuses will be implemented as soon as possible through further and detailed consultations.

Wang said the two nations are willing to enhance their cooperation on international and regional issues, and to facilitate a political settlement of hotspot issues.

He hopes that with joint efforts, the cooperation list between the two countries will be extended, and the list of differences will become shorter and shorter.