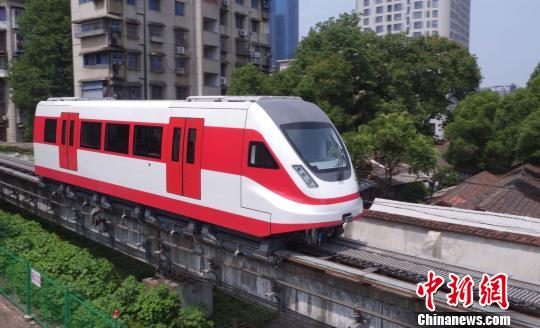 A new type of medium-low-speed magnetic levitation (maglev) train that can achieve a top speed of 160 kilometers per hour completed a successful test run in Tangshan City, Hebei Province, on May 23, 2018. (Photo/China News Service)

With two carriages and a maximum capacity of 318 passengers, the fifth-generation maglev train prototype was a joint creation between CRRC Tangshan and several institutes including the National University of Defense Technology, Beijing Enterprises Holdings Maglev Technology Development, and the CAS Institute of Electrical Engineering.

Wang also said the joint research team overcame a number of technical challenges in designing the fully indigenous train and set an example in integrating military technology for civilian use.

The new maglev train will mainly be used for intercity railway lines, such as among city clusters, and is being promoted as an efficient, environmentally friendly rail solution for China's urbanization as well as international cooperation, according to Wang.

Wang said the successful test run lays the foundation for the sixth-generation maglev train with a designed speed of 200 kilometers per hour.

Established in 1881, CRRC Tangshan is China’s first railway equipment manufacturing company, and the maker of the first Chinese locomotive "Rocket of China" and the first Chinese passenger train "Palace Car." On Jan 9, 2011, CRH380BL EMU, in a service test of the Beijing-Shanghai express railway, set a record speed of 487.3 km/h, which was the "world's fastest railway test speed."