Obama's legacy in trouble as Trump seeks to repeal Obamacare 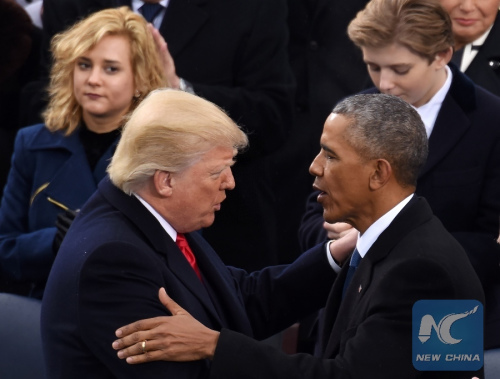 The legacy of former U.S. President Barack Obama is in trouble as his successor Donald Trump seeks to repeal and replace Obama's landmark legislation - the controversial healthcare overhaul known as Obamacare.

Trump earlier this week pushed his replacement legislation for Obamacare through the House of Representatives, and the new bill is going next to the Senate for a vote.

The Republican Party (GOP) has blasted Obamacare for years, calling for it to be repealed and replaced for myriad reasons, including high cost of deductibles it has caused, the de-facto tax levied on those who do not purchase health insurance, and severe limits on choice of healthcare plans the law has created in the market.

Supporters of the law countered that it has enabled around 24 million Americans to purchase healthcare insurance, who previously did not have it. And many people like the stipulation that now, under Obamacare, no health insurance company may refuse coverage to someone who is already sick.

If Trump's healthcare plan passes the Senate and Trump signs it into law, the move would take away Obama' s major achievement during eight years in office.

"Obama's legacy is in trouble because Republicans are seeking to repeal everything he did," Darrell West, vice president and director of governance studies of the Brookings Institution, told Xinhua.

"That would represent a stunning reversal for Obama," West said.

However, "several of these changes won't be phased in for several years and that gives Democrats a chance to fight the GOP changes," West said.

Julian Zelizer, professor of history and public affairs at Princeton University, wrote earlier this week on CNN's website that the vote to repeal and replace the Obamacare "demonstrates the serious threat that the president, when he is able to work in tandem with the Republican Congress, poses to President Obama's legacy."

"Despite the conventional wisdom that it is almost impossible to dismantle domestic programs once they are up and running, the House just took a big step toward doing so," Zelizer argued.

"This presidency is far from over. The stakes of what takes place in the next few months are enormous. Democrats should take this vote as a lesson that this White House and Congress can still pack a powerful punch," he contended.

Still, some experts noted that Trump's healthcare plan - or Trumpcare, as some are calling it - is being done within the guidelines outlined by the previous administration.

"I think Obama's legacy remains firmly in place because even the changes the Republicans are proposing are taking place within many of the outlines put in place by Obama, and the debate is over the aspects of Obamacare that are seen as costly and intrusive by GOP leaders and conservative activists, but increasingly popular amongst the public," Dan Mahaffee, senior vice president and director of policy at the Center for the Study of Congress and the Presidency, told Xinhua.

The bill is also being blasted by pundits and experts for the lighting-fast timeframe in which it was written and passed in the House - just three months after Trump's inauguration.

A bill of that magnitude, with far-reaching impacts on major parts of the economy, needs to be evaluated over a period of a year or more, experts said.

Indeed, there's been not one Congressional hearing on the bill, and the administration has not been particularly transparent about what it contains.

Mahaffee said three months was a highly compressed time frame to tackle something as complex as health care.

"I think the House (and some in the Trump Administration) were increasingly pushed to move something, even if large swaths of it are dead on arrival in the Senate," he said.