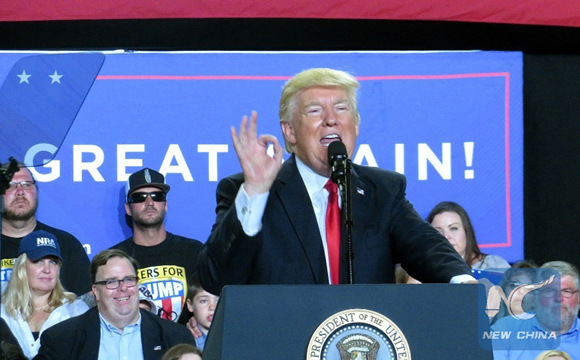 U.S. President Donald Trump said in an interview aired Monday that his claims that his predecessor Barack Obama had ordered Trump Tower wiretapped prior to the Election Day "have been proven very strongly".

"I don't stand by anything. Just you can take it the way you want. I think our side has been proven very strongly," Trump said when asked about the question in a prerecorded interview in the Oval Office with John Dickerson, the host of "Face the Nation" on CBS.

"I think that is a very big surveillance of our citizens. I think it's a very big topic. And it's a topic that should be number one, and we should find out what the hell is going on." he went one.

On March 4, Trump claimed in a tweet storm that Obama had Trump Tower wiretapped before his election victory, offering no evidence.

"Terrible! Just found out that Obama had my 'wires tapped' in Trump Tower just before the victory. Nothing found. This is McCarthyism!" Trump tweeted. Hours later, Obama's spokesman said Trump's accusations were "simply false".

Later in March, under growing pressures from bi-partisan lawmakers for no evidence occurring, Trump defended his accusation by broadening the definition of the word wiretap.

"Wiretap covers a lot of different things," Trump said in an interview with Fox News.

At the time, White House press secretary Sean Spicer said Trump's tweets weren't meant to be taken literally since the president could have been referring to a broad range of surveillance activity.

"The president used the word wiretaps in quotes to mean, broadly, surveillance and other activities," said Spicer. "He doesn't really think that President Obama went up and tapped his phone personally."