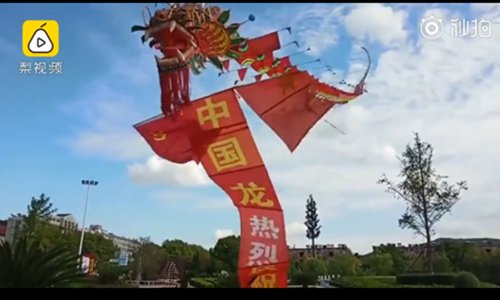 A 75-year-old man in Central China amazed local residents and netizens when his dragon-shaped kite with a 365-meter-long tail took to the skies to celebrate the 70th anniversary of the founding of the People's Republic of China (PRC).

Wu Shanfu, living in Xiangyang, Hubei Province, flew his kite at a local square on Friday, a video posted by Pear Video on Sina Weibo shows.

The video shows a kite with a large dragon's head and menacing-looking teeth and a tail that streams far off into the distance.

The dragon's length represents the days of the year the country is blessed with fortune, and its 56 sections represent the number of China's ethnic groups.

"I made this kite to celebrate the anniversary of the founding of the PRC and to bless the perpetual prosperity of China," Wu said.

Chinese netizens were in awe of Wu's accomplishment.  "The kite is as long as the eye can see. How can he fly it? It is amazing," a Weibo user wrote.  The video didn't show how the kite was anchored or how many people it took to get it airborne.

"This shows true love for our motherland," another netizen wrote in a comment that had many thumbs up.