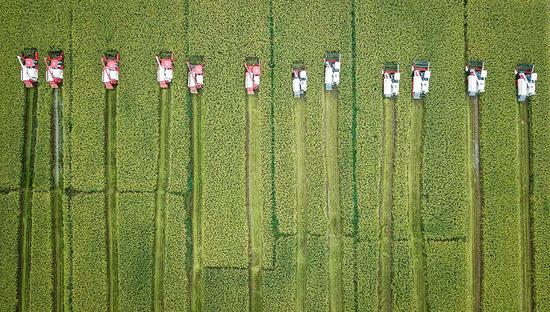 Editor's note: To celebrate the 70th anniversary of the founding of the People's Republic of China, we are publishing a series of stories reflecting on changes and developments in fields such as law, education, transportation and the environment. This is the fifth in the series.

Scientific breakthroughs and new technology have overcome the challenge of feeding the world's largest population.

From the sweet potato fields of North China, where agricultural machinery digs up the root vegetable, to the golden-tan rice terraces and crimson grapes hanging from vines in the southwest, the autumn harvest is in full swing across the country.

They had plenty to celebrate. With a bountiful summer harvest and only a mild drop in rice yields in early autumn, the country is on track for a bumper year in which grain production will exceed 650 million metric tons, the Ministry of Agriculture and Rural Affairs said last month.

It would mark the fifth consecutive year that grain output has topped 650 million tons, nearly five times higher than during the 1950s, the early days of the People's Republic of China.

In the past seven decades, the country has also made great strides in other key metrics used to evaluate food security, the ministry said.

The rise in overall grain production has outstripped population growth, with per capita grain output jumping from less than 0.21 tons in 1949, the year New China was founded, to 0.47 tons last year. The population nearly doubled during the same period.

Over the years, President Xi Jinping has reiterated that China needs to hold its own food bowl firmly in its hands, and the bowl should be filled with grains grown in China.

According to Guang Defu, a spokesman for the ministry, supplies of a wide range of agricultural produce, ranging from fruit and vegetables to meat and dairy products, have risen markedly.

"China has not only solved the basic demand for food for nearly 1.4 billion people, but is also close to moving from supplying sufficient food products to providing rich and nutritious diets for its people," he said.

The path to food security is especially daunting for China. That's because the country has just 7 percent of the world's arable land and only 6 percent of its fresh water, but more than 20 percent of the global population, according to a policy document released by the central leadership in early 2013.