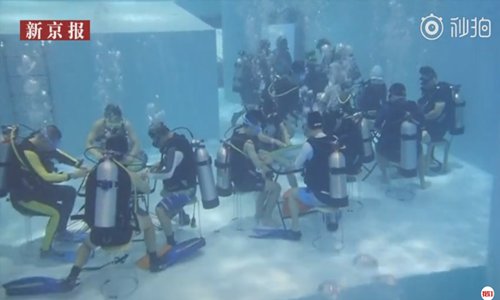 Scuba divers play underwater Mahjong in a swimming pool in Suzhou, East China's Jiangsu Province on Saturday. (Photo/Screenshot from a video posted by the Beijing News.)

An underwater Mahjong competition played by scuba divers in a swimming pool on Saturday attracted a lot of attention on China's social media.

A video posted by the Beijing News shows at least 16 divers sitting around four tables at the bottom of a pool playing Mahjong tiles in Hangzhou, East China's Zhejiang Province.

"We are a diving-training company. Chinese people are crazy about Mahjong, so why not combine the two," said Zhang Yang, an employee of the company, which has held four such competitions.

A game can take up to two hours to complete and that doesn't include pool-side breaks and strapping on full tanks of oxygen. "We require all the participants to get out of the pool every 40 minutes and have a rest for about an hour," said Zhang.

The video shows just how awkward it is playing Mahjong underwater, which normally includes an energetic slam of a tile on the table at every player's turn and a triumphant exclamation of "Hula" when a participant reveals their winning hand.

"Underwater Mahjong seems pretty quiet and the normal lively atmosphere of playing Mahjong is lost in that competition," wrote a net user.

"That looks really awesome, I'd like to try it some day," wrote a net user on China's Twitter-like Sina Weibo.