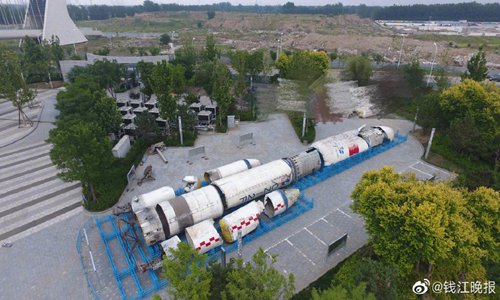 A restaurant made for the recovered fuselage of a Long March 2 rocket is under construction and will soon open in East China. (Screenshot photo/Qianjiang Evening Daily)

Ever wanted to get close enough to touch one of China's giant Long March Rockets that has actually traveled into outer space? Soon you'll be able to get up close and personal by having a meal inside the fuselage of one of the recovered rockets, in Hangzhou, East China's Zhejiang Province.

A restaurant consisting of all the recovered stages of a Long March 2 rocket is under construction in the city and it will open in mid-September, according to post by Qianjiang Evening Daily on China's Twitter-like Sina Weibo on Wednesday.

This particular Long March 2 was used to carry into space a module for Tiangong-2 space laboratory and the Shenzhou 11 spacecraft with astronauts Jing Haipeng and Chen Dong on board in October 2016.

The fairings for rocket's boosters and other stages are being turned into dining rooms of the new restaurant, according to the post, which didn't mention which type of cuisine will be on the restaurant's menu.

"Will they serve food eaten in space by astronauts in the restaurant?" a netizen asked. "If so, I am definitely in."

"It's a good example of how to change trash into treasure," wrote another.

Some netizens wondered how the restaurant owners were able to obtain the actual Long March 2 rocket.