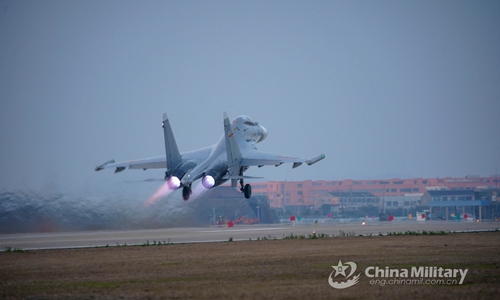 A Su-30 fighter jet attached to a naval aviation brigade under the PLA Eastern Theater Command takes off during the air combat confrontation training in southeast China’s Zhejiang province on February 5, 2020. (eng.chinamil.com.cn/Photo by Li Hengjiang)

The Chinese People's Liberation Army (PLA) on Monday launched joint drills featuring naval and air forces near the island of Taiwan, one day after it conducted a combat readiness drill which saw its warplanes encircle the island.

The joint drills on Monday came only one day after PLA forces conducted a combat readiness drill on Sunday with warships, bombers, jet fighters, and early warning aircraft. The combat planes cruised through the Bashi Channel and Miyako Strait and conducted real combat-oriented training.

Song Zhongping, a mainland military expert and TV commentator, told the Global Times on Monday the concentrated PLA drills are not only warnings to Taiwan secessionists, but also demonstrations of PLA capabilities to solve the Taiwan question by force.

Song said these trainings are real-combat oriented and will be useful in potential battles against Taiwan's military force.

Taiwan secessionist forces are disregarding the greater national interests, intensifying its scheme pursuing "independence," going against the trend and the will of the people, Zhang said, noting that the PLA Eastern Theater Command troops are always on high alert, closely following the situation and are ready to resolutely fulfill its missions.

An authoritative source who declined to be named told the Global Times after the first operation on Sunday that Taiwan's Democratic Progressive Party has been increasingly colluding with the U.S., attempting with the U.S. to confront the Chinese mainland, planning Lai Ching-te's U.S. visit, seeking "independence."