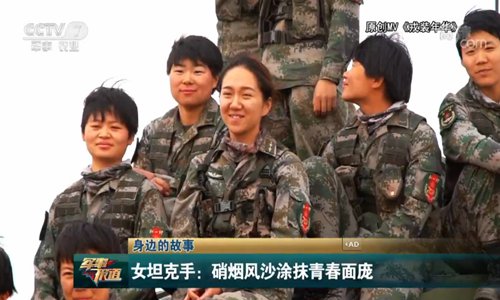 Chinese net users hailed the first 10 women who hurdled the training as operators of the country's most advanced tank, calling them modern-day Mulans, a legendary heroine who disguised herself as a male warrior in place of her father.

The squad started training on the Type 99A tank two months ago at the Zhurihe training base in Northwest China's Inner Mongolia Autonomous Region, where the climate is dry and dusty and temperatures can dip to -40C, China Central Television (CCTV) reported.

The sunshine and sandstorms transformed their appearance, but Liu Shushan, one of the operators who used to have long hair and light skin, said "Now I feel pretty when I'm driving the tank fast, with wind and sand blowing in my face."

Operating a tank is pretty cool but eating dirt is also a must," said tank operator Zheng Jingyue. "After eating so much sand in open-cockpit training, I am not hungry," she said with a laugh.

Chinese net users praised the women's courage and strength, saying they are the "Mulans of the times."

Mulan was a legendary warrior woman who pretended to be a man in order to fulfill her father's military service and protect her country.

Many netizens said they are also looking forward to seeing them at a military parade in October to mark the 70th anniversary of the founding of the People's Republic of China.

However, analysts said that the female tank operators may not appear at the parade; otherwise, they should have been rehearsing at a military base near Beijing instead of being trained in the steppe desert.

"But the public will be able to see other female soldiers, such as pilots from the Bayi Aerobatic Team flying over the Tiananmen Square and performing," Li Daguang, a professor at the National Defense University of the People's Liberation Army (PLA), told the Global Times.