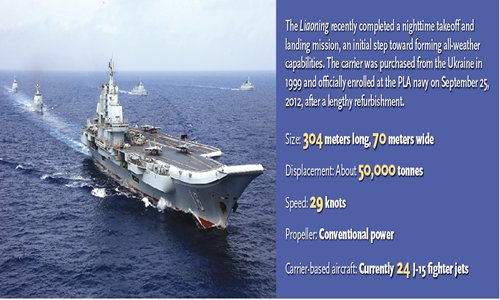 ○ Experts estimate that China's third aircraft carrier, currently at the construction stage, will be more advanced than the Liaoning or the Type 001A

China's first operational aircraft carrier, known as the Liaoning, recently completed its nighttime takeoff and landing mission, signaling that this carrier has initial all-weather capabilities, a key step toward the formation of practical capabilities for combat.

State television broadcaster China Central Television (CCTV) released a video clip showing a Chinese carrier-borne aircraft taking off and landing at night on May 24. The images revealed that a J-15 aircraft, guided by a deck officer and a takeoff and landing system, successfully completed its operations in the dark nighttime environment. This is the first time that State media has confirmed that the carrier has the ability to take off and land at night.

Beijing-based naval expert Li Jie told the Global Times previously that only when the pilot of a carrier-borne aircraft grasps the ability to take off from and land on an aircraft at night can he become a truly qualified pilot. The Liaoning can be called a real aircraft carrier only when it has an all-weather combat capability.

Based on the CCTV video clip, Li speculated that there should be at least four pilots who are trained to successfully take off and land at night.

Nighttime missions on aircraft carriers are internationally recognized as far more challenging and dangerous than in the daytime due to limited lighting, blocked vision and psychological pressure. Previously, only the U.S., Russia, France and the UK had mastered night-time carrier-based aircraft takeoffs and landings.

Chinese experts expect that the next phase of the task will focus on nighttime taking off and landing training in more complex weather conditions.

The night landing is reportedly a big challenge for pilots because they struggle to distinguish signal lights. During daytime landings, carrier-borne aircraft pilots rely on Fresnel Lens Optical Landing System (FLOLS), widely used in giving glidepath information for pilots in the terminal phase of landing, with support of the landing signal officer, to achieve a safe landing.

But during the night, due to the lighting control in order to avoid exposure, the references an aircraft pilot can rely on become very limited, which requires pilots to touch down based on the aircraft's own searchlights and the sign lights for the runway, supported by other navigation devices.

Air combat emphasizes high intensity and fast pace, and is generally carried out around the clock to ensure no breathing space for the opponent. Night flight training is therefore an important indicator of the operational capability of an air force, including a carrier-borne aircraft force, Wang said.