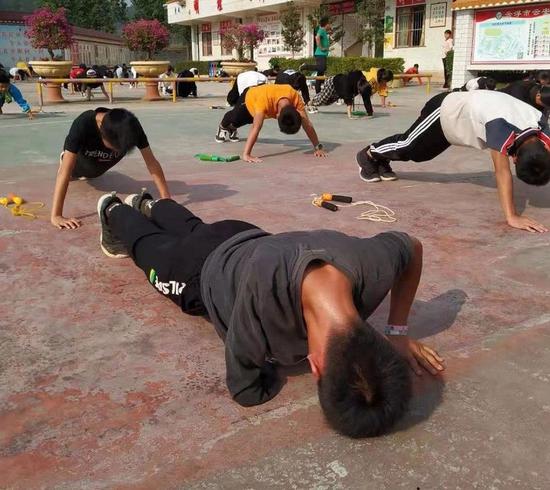 Zhang Jiacheng is doing push-ups with classmates at his school. (Photo/Xinhua)

If a person lost an arm, how could he or she still play basketball, or even dribble like Kyrie Irving does? Zhang Jiacheng, a 13-year-old Chinese boy, did it and impressed everyone.

After a short clip of the teenage basketball player playing a one-on-one competition was recently posted online, Zhang soon became an Internet sensation and was highly praised for his strong will and extraordinary skills.

"It's the power of basketball. So impressive and inspirational!" a netizen wrote on microblog Sina Weibo, Twitter's equivalent in China.

Zhang's dribbling skills, and the story behind it, became a trending topic on Weibo, with more than 35 million views as of Tuesday.

In the clip, Zhang showed his dribbling abilities and shooting skills in front of a defense made up of several professional basketball players, and received a loud cheer from the audience watching on site.

He also opened an account on Douyin, the Chinese version of Tiktok, and released 15 short videos of him practicing and honing his basketball skills, which has earned him over one million likes in just a few days.

Born in southern Chinese province of Guangdong, Zhang lost his right arm in an accident at just five years old, which was a tragedy for a little kid. But Zhang has never surrendered to his fate as his love and passion for basketball grow stronger.

"Your right hand has been taken away in a brutal way, but you have the best left hand. You are the real star in this game," former CBA player Wang Jing spoke highly of Zhang's performance.

Zhu Fangyu, general manager of defending champions the Guangdong Southeast Tigers, wrote on his Weibo account that the CBA powerhouse would like to invite Zhang to visit the team and watch home games.

"This is the best kid I have ever seen playing basketball," Zhu said, noting that as soon as this season's CBA reopens and audiences are allowed to come and watch games, they will invite the teenager.

Zhang is a fan of Kyrie Irving and he uses a poster of the dribbling master as the cover image of his Douyin account. The one-armed teenager dreams to be a basketball player.

"Give it a try, or give it up," he wrote when releasing a video clip.