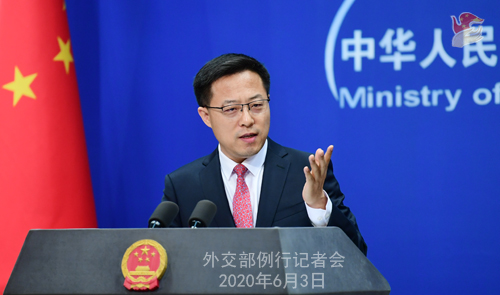 (ECNS) -- China lodged stern representations with the UK on Wednesday over its Foreign Secretary Dominic Raab's remarks on Hong Kong, saying Britain has no jurisdiction or supervision over the Chinese city.

Raab said on June 2 to Parliament that China's authoritarian national security law undermines "one country, two systems", and China's decision to impose the new law on Hong Kong lies in direct conflict with its international obligations.

"We deplore and reject the UK side's unwarranted accusations and blatant interference in Hong Kong-related affairs and China's internal affairs. We have lodged stern representations with the UK," said the spokesman.

Zhao said national security is the very foundation for the existence and development of all countries, and the core and fundamental element of national sovereignty. China and the UK negotiating and signing the Joint Declaration is all about China's resumption of sovereignty over Hong Kong. The national security legislation for Hong Kong is part of the definition of China's exercise of sovereignty. The basic policies regarding Hong Kong declared by China in the Joint Declaration are China's statement of policies, not commitment to the UK or an international obligation as some claim.

After Hong Kong's return to the motherland, the Chinese government administers the SAR in accordance with the Constitution and the Basic Law, not the Sino-British Joint Declaration, he added.

The UK's historical link with Hong Kong arises from the period of invasion, colonialism and unequal treaties. The UK flagrantly claims that the Hong Kong-related legislation is "authoritarian" he said, adding that, this is precisely the word to describe its colonial rule in Hong Kong.

"It is after the return of Hong Kong that the residents came to enjoy unprecedented rights and freedoms. To quote its own words, we urge the UK to 'step back from the brink', reject the Cold-War mindset and the colonial mentality, recognize and respect the fact that Hong Kong has already returned to China as a special administrative region," Zhao said.

Britain should abide by international law and basic norms governing international relations and immediately stop interfering in Hong Kong affairs and China's domestic affairs, otherwise, there will be consequences, he warned.