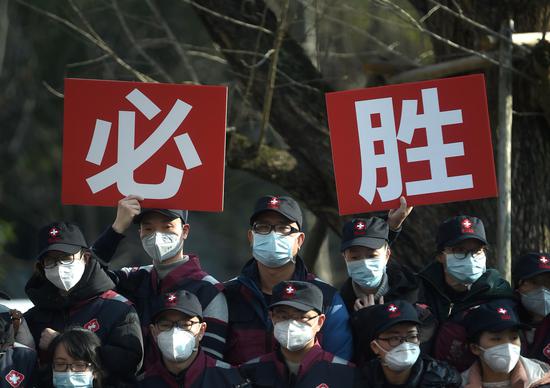 "Pairing-up support for Hubei!" -- China has stepped up its fight against the novel coronavirus as it released a plan for over half of China's provincial-level regions to aid cities in Hubei, where the epicenter city of Wuhan is located.

As of Sunday, Hubei had reported 29,631 confirmed cases. Besides Wuhan with over 16,000 patients, five cities in the province have seen more than 1,000 confirmed cases, and the rest see climbing figures.

Aid for those smaller cities, which face increasing challenges but with limited resources, remains urgent.

According to the plan, the other provincial-level regions have paired up with all 15 cities and Shennongjia forest district (with Wuhan excluded) across Hubei. Besides a massive influx of medical staff and equipment, supplies have poured in as well.

The National Health Commission on Sunday said a total of 11,921 medical personnel from almost all the provincial-level regions have been dispatched to Hubei to aid the epidemic fight.

As of Sunday, Huanggang near the provincial capital of Wuhan had reported 2,252 confirmed cases and 45 deaths. According to the health commission of central China's Hunan Province, two batches of 274 medical members have begun working there.

Zeng Puhua, vice president of the affiliated hospital of the Hunan Academy of Traditional Chinese Medicine, has been working around the clock in the SARS treatment-model hospital of Huanggang since late January.

"The daily number of confirmed cases remains high here. The medical staff change shifts every six hours, and each doctor is in charge of seven to 10 patients," Zeng said.

"Previous clinical experience has proven that traditional Chinese medicine plays an active and effective role in the treatment of pneumonia-related epidemics," Zeng said. 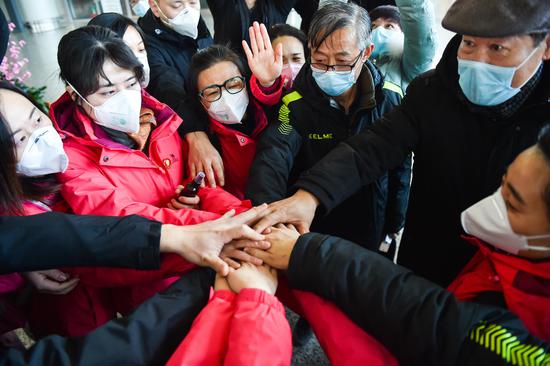 Members of the fourth medical team of Shanxi and their colleagues cheer for each other before leaving for Hubei Province at Wusu International Airport in Taiyuan, capital of north China's Shanxi Province, Feb. 9, 2020. (Xinhua/Chai Ting)

The small-scale hospital equipped with portable medical devices can perform basic clinical functions and "can operate on its own for seven to 10 days without local support," said Zhang Gangqing, leader of the medical team.

Meanwhile, four batches of medical staff totaling 318 critical care and respiratory specialists from southwest China's Chongqing Municipality have been summoned and sent to the cities of Wuhan and Xiaogan since late January, according to the local health commission.

"More medical staff will be dispatched to our pairing-up city soon," Xing said.

On Sunday, 2,500 kg of fresh navel oranges harvested in Chongqing's Fengjie County arrived in Wuhan. The vitamin-rich oranges will be given out to frontline medical staff, said Xiao Gongxun, director of Fengjie's orange industry development center.

Xiao said the batch of fruit worth 250,000 yuan (about 36,000 U.S. dollars) was donated by 11 growers and dealers, and picked, cleaned and packaged within two days thanks to local volunteer farmers and residents wanting to help.

"Everyone on the farm basically depends on the Wuhan market. Now it's going through difficulties, and we want to send our love," said Sheng Guilin, owner of an eggplant farm in the city of Mengzi.

Besides eggplants, the farm purchased seven other types of vegetables. With the help of volunteer farmers and local residents, over 40 tonnes of fresh vegetables have arrived in Wuhan so far.

In the meantime, 22 tonnes of bananas, donated by all the 93 households in a village under Hekou County, were collected and sent to Hubei. Among the donors, 47 are registered impoverished households.

The residents of Miandian Township under Jianshui County also loaded trucks with over 100 tonnes of onions within just half a day, before transporting the crops to the city of Huangshi near Wuhan.

The Yunnan agricultural department said it has increased staff members to step up approval and inspection processes and enhance vegetable allocation and transportation to Hubei.

Pairing-up assistance plays an important role in China's development. The pairing of developed and underdeveloped, disaster-hit and other areas is almost ubiquitous in China. Under such a framework, capital, skilled workers and all sorts of resources have been channeled to the country's vast western regions including Tibet and Xinjiang, to help the reconstruction of quake-stricken areas in Sichuan, and the anti-poverty campaigns across China.

This ability to "concentrate resources to solve major problems," as Chinese often describe it, is a notable advantage of China's socialist system that has helped the country overcome major challenges over the past decades.