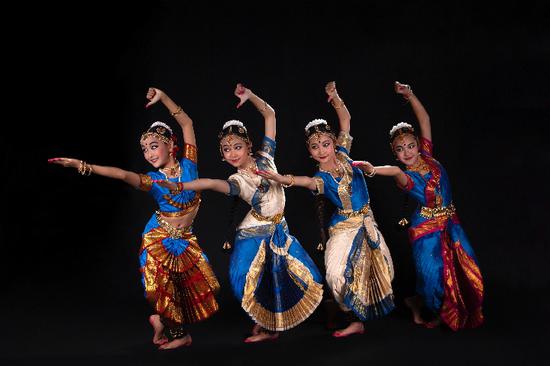 In a villa in northeast Beijing, a dozen young children danced to the rhythm of Bharatanatyam, a major form of Indian classical dance.

Leela Samson, one of the world's most eminent Bharatanatyam dancers, watched with amazement. "They are extremely devoted, even little children show a high sense of responsibility. It's quite amazing," she said.

These children, aged 5-12, are among the youngest generation of Bharatanatyam lovers in China, who shared an enduring passion for this ancient Indian art. Their devotion helped more Chinese people appreciate Bharatanatyam and bridged the cultures of China and India.

As Samson showed her moves, the children were mesmerized. Her dance is poetic. Every blink of eye, flip of finger and stamp of feet conveys a meaning or emotion so powerful, melodious and charming that even the cleverest play of words pales into insignificance.

Nine-year-old girl Cang Yuexin relished each moment with Samson, their grand-teacher -- the teacher of their teacher. "She speaks with her eyes, her face and her hands. I want to be like her." 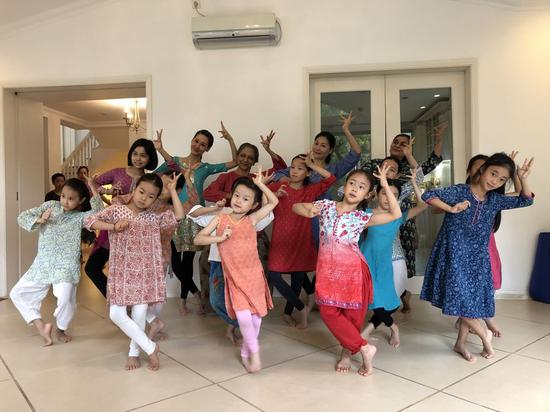 "When you sing and dance, you don't need languages to communicate. I think this is the best way to bring people of the two countries closer and this also helps contribute to the friendly ties between the two nations," said Jin Shanshan, a disciple of Samson and teacher of the Chinese students.

After decades of practice under the guidance of Samson, Jin has become one of China's leading Bharatanatyam dancers and teachers. She often led her students to stage performances in cultural centers in Beijing and in events sponsored by the Indian embassy or companies. They have cultivated a niche Chinese audience who enjoy the dance and Indian culture.

Samson believes the love of dancing has the power to bring people together. "Who doesn't like dance? It brings a smile to everybody's face. When a farmer sees a girl dancing, he smiles and also wants to dance. It's the same all over the world. That's what's beautiful about dancing."

The young children are lucky to be able to learn from Samson in person. In recent years, she has been traveling from her home in Chennai to perform and teach in Beijing. Chennai is the capital of south India's Tamil Nadu, where Bharatanatyam originated.

For Jin, it was a tall order just to meet with Samson back in the 1990s. Fascinated by Samson's performance, Jin had determined to become a student of her idol. She made her way into China's prestigious Peking University and earned herself a scholarship in order to travel to India.

But when she finally met with Samson, Jin was rejected, thrice. She never gave up. Moved by her persistence, Samson accepted her as a foreign disciple, which was rare at that time. Now Jin sees those early rejections as trials in her pursuit of the art, which ended up strengthening her conviction.

"I'm lucky to have met my guru. She showed me the way of art. Now I'm ready to devote my life to Bharatanatyam," Jin said.

Jin's students inherited her grit. Young as they are, the children never gave in to the hardship of learning a foreign dance. They often practised basic moves for hours in a run. "These little children, even just 5 or 6 years old, learn with extreme dedication. They just glow to me. So I'm always happy to come here," Samson said.

Samson sees a generational cycle of learning classical Indian dance in China. Young children get their first glimpse of the art and early stage training from a Chinese master. Then they go to India to further their studies and skills with an Indian guru. Some of them will someday become masters and lead more onto the path.

Today, Jin is the Chinese master. Some of her students have already studied in India. Before Jin, there was Zhang Jun, the late co-founder of China's renowned Oriental Song and Dance Ensemble. Zhang first visited India as a curious 19-year-old in the early 1950s. She brought Indian classical dance to China and has inspired thousands throughout the five decades of her teaching career.

In the 1950s, Zhang kindled the passion for Indian classical dance in China to bridge the cultures of the two civilizations. The passion continues to thrive even after Zhang's passing away in 2012.

"I love my motherland and I love Indian culture. I really wish to contribute as much as I can to promote friendship between China and India," Jin said.