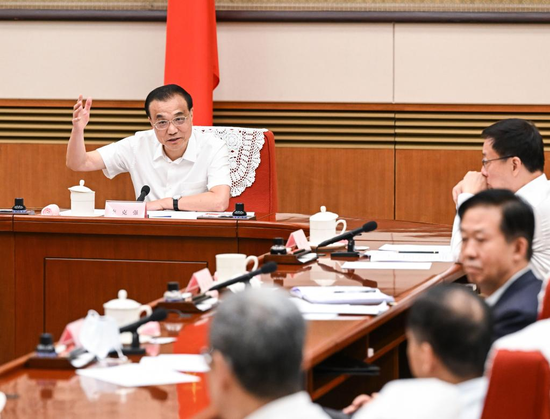 Chinese Premier Li Keqiang, also a member of the Standing Committee of the Political Bureau of the Communist Party of China Central Committee, presides over a symposium on the economic situation attended by economists and entrepreneurs in Beijing, capital of China, July 12, 2022. (Xinhua/Rao Aimin)

Chinese Premier Li Keqiang has stressed consolidating the foundation of economic recovery, calling for efforts to bring the economy back on a normal track as soon as possible and keep it running within a reasonable range.

Li, also a member of the Standing Committee of the Political Bureau of the Communist Party of China Central Committee, made the remarks on Tuesday while presiding over a symposium on the economic situation attended by economists and entrepreneurs.

With a raft of economy-stabilizing policies taking effect quickly, these indicators pointed to a hard-fought recovery in May and June. However, the foundation for recovery is still unstable and requires more arduous efforts to prop up the economic fundamentals, the premier said.

Concerted efforts must be made to consolidate the foundation of recovery in the third quarter and get the economy back on track as soon as possible, he said.

To keep the economy running within an appropriate range, the country should place equal emphasis on stabilizing economic growth and curbing inflation, particularly imported inflation. It should ensure both the intensity and rationality of the macroeconomic policy, Li said.

The country, accordingly, needs to ensure that all relief measures for businesses are carried out effectively and make further moves to unclog transport, logistics and industrial and supply chains.

While creating more jobs through market-based means, the country should safeguard the employment of college graduates and migrant workers and rectify all types of discriminatory practices against jobseekers, Li said.

On stabilizing food and energy prices, Li called for efforts to bolster autumn grain production and improve the supply capacity of coal-powered electricity.

Adhering to a policy of reform and opening-up, the country will continue to create a market-oriented, law-based and internationalized business environment, with measures to nurture market entities and boost market vitality, according to Li.

Efforts will also go into expanding consumption with market-based and sustainable approaches, eliminating all obstacles to investment and stabilizing foreign trade, Li added.