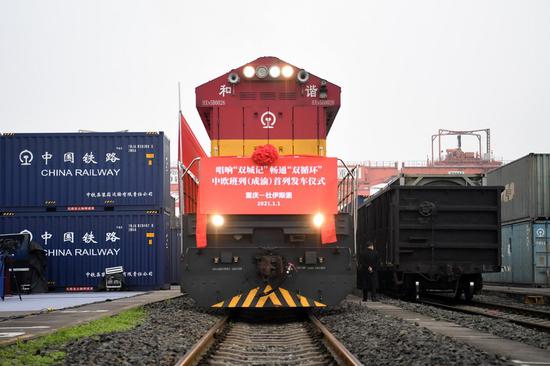 The trade volume between China and the European Union turned the tide and reached a record high of more than 800 billion U.S. dollars in 2021, up 27.5 percent year on year.

During the same period, as a pillar for trade and economic cooperation across the Eurasian continent, the China-Europe freight train service handled a record 15,000 trips, and transported 1.46 million twenty-foot equivalent units (TEU) of goods, up 22 percent and 29 percent respectively over the previous year.

In addition, new technologies and the two sides' common pursuit of green development have become another development booster between China and the EU.

"We see China as a pacesetter in topics like electrification or digitalization. What moves China today will move the world tomorrow," said Zipse, adding that BMW's four innovation and digitalization bases in China are its largest R&D bases outside Germany.

"China is already the world's leader of electro-mobility, a key driving force of digitalization, and now is decisively pursuing high-quality growth and a circular economy. It is a perfect place and a great partner for us to drive transformation, going electric, digital and circular," said Nicolas Peter, member of the board of management of BMW AG.

On Jan. 1, a shortened negative list for foreign investment came into force with off-limit items cut to 31 from 33 a year ago, which included the removal of the foreign capital cap in China's auto industry. This has enabled more European enterprises like BMW to expand their investment in China.

These future prospects are further brightened by China's policy decisions, according to Zipse. "Looking ahead, we are encouraged by China's pledge to further open its market, as well as its efforts to promote green development and innovation."

From his perspective, collaboration and mutual trust are key to creating growth and prosperity.

"The year 2022 marks the 50th anniversary of the establishment of Sino-German diplomatic relations. And for the sixth year in a row, China was Germany's most important trading partner in 2021. Our experience in China is a good example of successful collaboration between the two countries and between China and Europe," said Zipse.