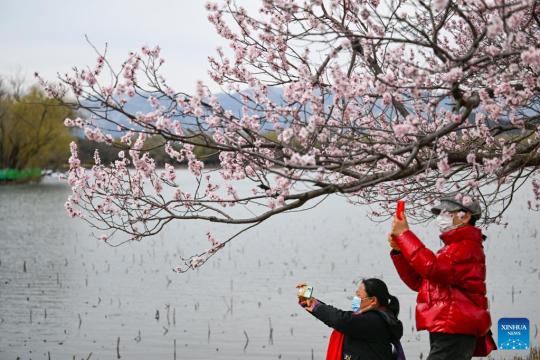 Beijing reported one new locally transmitted COVID-19 infection case between 4 pm on Monday and 4 pm on Tuesday. The patient was a close contact with a person, confirmed to be infected one day earlier, who is an employee of a clothing store that sells imported clothes in Chaoyang district.

By 4 pm on Tuesday, six employees of the clothing store had been infected. Another three confirmed cases reported on Monday were family members of an earlier confirmed case, according to Pang Xinghuo, deputy director of the Beijing Center for Disease Prevention and Control, at a news conference on Tuesday.

"Based on recently reported cases, the imported non-cold-chain items have a high infection risk," said Xu Hejian, spokesman for the Beijing municipal government. "Beijing will strengthen the measures on those items including international mail, packages and industrial components to reduce risks."

According to the new regulation, customs staff members should disinfect imported items regularly and normal imported items should be stored for at least seven days after disinfection and before being used.

The import companies are encouraged to conduct nucleic acid testing of the covers of imported packages. All the imported items will be registered with traceable information during the entire process.

As for storage, all the imported items should be sorted according to countries and regions.

Beijing's health authority reminded the public of the infection risks when purchasing items from countries with severe pandemic situations.

In recent days, some other cities, including Dalian, Liaoning province, and Changshu, Jiangsu province, reported infections related to imported clothing from South Korea.

Dalian reported on Saturday that the gene sequence of one case did not match a recent round of the epidemic in the city. That case involved a staff member at a clothing shop in Dalian.

It's possible that the person was infected by contacting contaminated imported items, health authorities in Dalian said.

Another case in Changshu was reported on Saturday, and items of clothing tested positive. The four items in that case were bought online from South Korea.

Chinese researchers have also found that a COVID-19 cluster detected in Beijing in January involving the Omicron strain was likely caused by contaminated overseas mail.

Experts have reminded the public that people should disinfect packages with 75 percent alcohol spray and tissue when fetching them and should not take the outer wrappings or boxes home.

In addition to the cluster from the clothing store, Beijing reported two transmission chains. One involved a patient who might have been infected during a train trip while returning to the city, and the other patient had flown back during the current outbreak in Beijing.

Epidemiological investigation showed that the patient who had taken the train to Beijing on Thursday had used a bathroom in the waiting hall of a station outside of Beijing that had been used by a contact of a confirmed case. The contact was later confirmed to have the virus.

Li Ang, deputy director of the Beijing Municipal Health Commission, said people who return to or arrive in Beijing from outside of the city should not dine out, get together with people or go to crowded places within seven days of arriving.

"Employees should take the nucleic acid test again 48 hours before going back to work. Before that, they should work from home," Li added.

In another development, Pang added that Beijing has downgraded its last medium-risk residential community to low risk after no new confirmed cases were reported in the community in the past 14 days. The whole city has become a low-risk area.