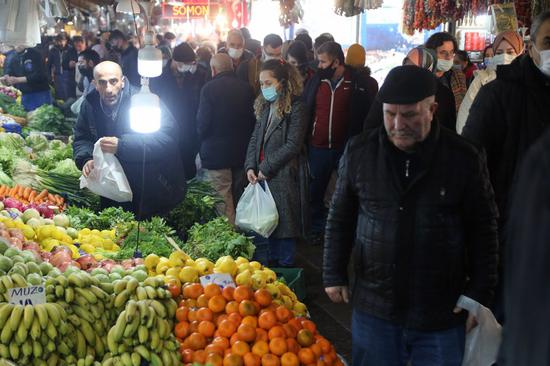 People shop at a market in Ankara, Turkey, March 3, 2022. (Photo by Mustafa Kaya/Xinhua)

Turkey's annual inflation rose by 54.44 percent in February, the highest since 2002, the Turkish Statistical Institute announced on Thursday.

The country's consumer prices soared 4.81 percent month on month in February, according to the data.

Meanwhile, the producer price index increased by 7.22 percent on a monthly basis, with an annual rise of 105.01 percent.

In February, the highest annual price increase was in transport with 75.75 percent, followed by furnishings and household equipment with 64.83 percent and food and non-alcoholic beverage with 64.47 percent.

The country's annual inflation rate was 48.69 percent in January.

Turkey has been struggling with elevated inflation, which puts pressure on its population with rising living costs. The economists predicted that the country is likely to live with high inflation throughout 2022.

In February, the Turkish government reduced the value-added tax (VAT) on basic food products from 8 percent to 1 percent.

Turkey's central bank kept the benchmark interest rate unchanged since January, halting an easing cycle that sparked a currency slump in the latter half of 2021.

The Turkish currency lira has lost roughly 60 percent of its value since 2021.

Erdogan is an advocate of low-interest rates, insisting that the move will lift the burden on investments despite the rising inflation.