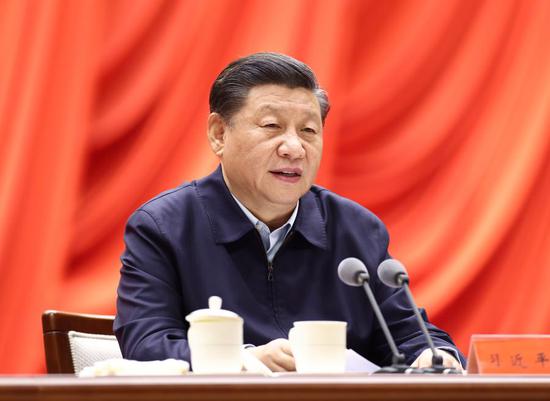 Chinese President Xi Jinping, also general secretary of the Communist Party of China (CPC) Central Committee and chairman of the Central Military Commission, addresses the opening of a study session at the Party School of the CPC Central Committee attended by provincial and ministerial-level officials, Jan 11, 2021. (Photo/Xinhua)

Xi, who is also general secretary of the Communist Party of China Central Committee and chairman of the Central Military Commission, made the remark when addressing the opening of a study session at the Party School of the CPC Central Committee, attended by provincial and ministerial-level officials.

Xi called for ensuring a good start for fully building a modern socialist country, adding that the next three decades will be a new development phase during which the Chinese people achieve a tremendous transformation from standing up and growing rich to becoming strong under the Party's leadership.

To deal with unprecedented opportunities and challenges faced by China during the new phase, Xi urged the whole Party to remain modest and prudent and make all-out efforts to realize set goals with perseverance.

"The world is undergoing profound changes unseen in a century, but time and situation are in our favor," Xi said.

Xi urged efforts to narrow interregional, urban-rural and income gaps in development so the people have a strong sense of fulfillment, happiness and security and thus achieve shared prosperity for everyone.

As China already stands at a new historical starting point, Xi said, the new development philosophy should be implemented in a more accurate way with targeted and pragmatic measures to earnestly address development imbalances and inadequacies and realize high-quality development.

Given the evolution of the principal contradiction facing Chinese society as well as the change in the world power structure, Xi also underscored the importance of becoming more aware of potential dangers, keeping in mind worst-case scenarios and getting prepared to deal with a more complicated and difficult situation.

He emphasized the need to dare to struggle with proper strategies and methods.

Calling a smooth economic circulation crucial for fostering the new development paradigm in which the domestic market is the mainstay and the domestic and foreign markets complement each other, Xi called for efforts to deepen supply-side structural reform, promote independent innovation, expand domestic demand and further open up to the outside world.

Xi also stressed strengthening overall Party leadership to achieve socialist modernization and urged continuous efforts to advance the modernization of the system and capacity for governance.