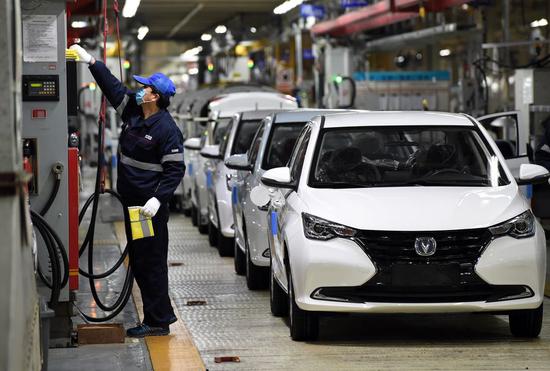 With policy incentives in place to unleash potential demand, China's automakers have been given a greater chance to survive the tough times ahead if they can cope with the coronavirus-related supply chain disruptions overseas while getting back to production.

A State Council executive meeting on Tuesday decided to extend subsidies and tax exemptions for new energy vehicle (NEV) purchases by another two years, which were set to expire at the end of this year.

Value-added tax on the sale of old vehicles by second-hand vehicle dealers will be decreased to 0.5 percent of the sales volume from May 1 to the end of 2023, the meeting decided.

The latest moves came as both central and local authorities had already unveiled various policies or voucher incentives to reignite the consumption potential of the world's largest auto market, which logged weak performance in the first two months.

Auto output and sales in the January-February period plunged by 45.8 percent and 42 percent to 2.05 million units and 2.24 million units, respectively, data from the China Association of Automobile Manufacturers showed.

To prop up growth, the Ministry of Commerce said Thursday that commerce authorities will unveil measures including subsidizing new car buyers and those who trade in their old cars for new ones.

On March 21, the southern Chinese city of Guangzhou announced a plan to boost consumption of NEVs and growth of the broader auto sector, which was expected to drive more than 20 billion yuan (about 2.83 billion U.S. dollars) of output value, while in Ningbo of east China's Zhejiang Province, customers who purchase locally produced and registered vehicles will receive subsidies of 5,000 yuan from March 25 to Sept. 30.

Besides the two cities, at least 12 cities have adopted similar policies to bolster automobile consumption over the past two months.

Enhanced incentives came like a shot in the arm, which in turn displayed the significant role of the automaking industry compared with other manufacturing sectors in reviving the Chinese economy disrupted by the sudden COVID-19 outbreak.

With its long industrial chain, the industry has been pivotal in propping up the national economy, said Xin Guobin, vice minister of the MIIT, at a Monday news conference.

Pan Helin, an expert in economics at Zhongnan University of Economics and Law, said the influence of the sector as a bustling automaking industry would not only help ensure the sales and income of upstream enterprises, but also boost the raw materials supply for downstream enterprises, facilitating the quick recovery of the whole industrial chain.

While the continued outbreak around the world could interrupt the supply chains of some Chinese automakers over the next few months, overall risks remain manageable in light of China's complete auto-supply chain and small exposure to auto-part imports, Fitch Ratings noted in a report.

COMPANIES ON THE MOVE

On Friday, China's leading automaker FAW Group launched a 2.69-billion-yuan test base project for NEVs and intelligent connected vehicles (ICVs) in Changchun, capital of northeast China's Jilin Province, where it is headquartered.

According to FAW, the project will mainly consist of two testing areas for NEVs and ICVs respectively, and will provide it with whole-process R&D and test capabilities for passenger cars after completion.

Nearly half a month ago, Changan Auto, another carmaker based in Chongqing, had started mass production of its level 3 autonomous driving car model, which was equipped with an autonomous driving system to identify traffic information and monitor the driver's vision and fatigue state to maintain the accuracy of autonomous driving.

On the marketing side, 94.7 percent of 4S shops had resumed operations as of March 24, according to a survey of 8,569 4S shops by the China Automobile Dealers Association (CADA).

The Chinese auto market has accumulated a large population of car owners after 18 years of growth in the fast lane. Further upgrades in products and technology and consumers' growing appetite for replacing their cars lay a favorable foundation for healthy sales growth, the China Passenger Car Association said in a report.

First-time buyers might have a stronger desire to own private vehicles to shield themselves from the virus as they seek to avoid public spaces, it said.

Actually, consumers' demand for car purchases was only curbed in the short period, rather than declined, the CADA said in a research report.

Amid the overall sales drop in the first two months, the share of purchase intention of luxury brands was increased, signalling that the trend of consumption upgrading was not hindered, it noted.

"We expect coronavirus-related disruption to automobile and parts production to be largely resolved by mid-April, although the global outbreak of the virus could cause supply shortages of certain imported parts, particularly for joint ventures that produce premium and high-end cars," the Fitch report noted.