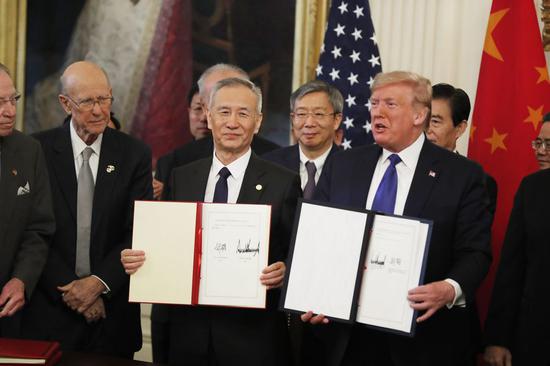 U.S. President Donald Trump and Chinese Vice Premier Liu He, who is also a member of the Political Bureau of the Communist Party of China Central Committee and chief of the Chinese side of the China-U.S. comprehensive economic dialogue, show the signed China-U.S. phase-one economic and trade agreement during a ceremony at the East Room of the White House in Washington D.C., the United States, Jan. 15, 2020. (Xinhua/Li Muzi)

China and the United States have taken an important step in the right direction by formally signing their phase-one economic and trade agreement in Washington Wednesday.

The hard-won deal signed by Chinese Vice Premier Liu He and U.S. President Donald Trump came after 13 rounds of high-level consultations and more than 20 telephone consultations between the chiefs of the negotiation teams from both sides over nearly two years.

A closer look at the deal would find the appearance of the phrase "the parties shall" which uses the collective reference of the Chinese and U.S. governments in almost all the articles, an indication that the text is based on equality and mutual respect and maximizes balance.

"The deal reflects not only the interests and demands of the U.S. side but also those of the Chinese side," Zhang Yuejiao, former chair of the Appellate Body of the World Trade Organization (WTO), told Xinhua. "It is a balanced deal in the interests of the two countries."

The deal mainly covers three major aspects: deepening two-way trade cooperation, further easing market access and continued improvement in the business environment. Under the deal, the two sides will establish the bilateral evaluation and dispute resolution arrangement to resolve issues in economic and trade relations in a fair, expeditious and respectful manner. The U.S. side also pledges to cancel some of its additional tariffs on Chinese products.

Noting that the deal will see the U.S. side make the switch from hiking to cutting additional tariffs, Gao Lingyun, a researcher with the Chinese Academy of Social Sciences (CASS), said: "The signing of the deal came at the right time and it will help provide a more stable external environment for China to accomplish its great cause of national rejuvenation."

The deal is generally equal and mutually beneficial as it fully addresses the reasonable concerns of both sides, Gao said.

In terms of deepening two-way trade cooperation, China and the United States are committed to scaling up trade in sectors including manufactured goods, agricultural products, energy and services.

"The two economies are highly complementary," said CASS researcher Dong Yan. "There is great potential in developing the two countries' trade given the extremely large size of their economies and markets."

Enhancing two-way trade cooperation is expected to boost the confidence of the global market and maintain stability in global industry and supply chains.

Zhang Yansheng, a researcher with the China Center for International Economic Exchanges, said: "Both sides have refuted claims of 'decoupling' with concrete actions, which is conducive to consolidating the foundation of their relations and increasing certainties for the stability and development of the global economy."

The deal stipulates the principles of China's expansion of imports from the United States. The U.S. side will take appropriate steps to facilitate the availability of U.S. goods and services to be purchased and imported into China, and the Chinese side will make purchases based on commercial and market considerations.

Enterprises are the ones that carry out the procurement, and the most important responsibilities of the Chinese and U.S. governments are to create conditions for normal and legitimate economic and trade exchanges between enterprises, Zhang Yansheng said.

He also noted that China had repeatedly expressed its willingness to encourage Chinese enterprises to follow WTO and market rules in negotiating import agreements with U.S. enterprises and ensure that the agreements will not discriminate against goods and services from other countries and regions.

China is the world's largest importer of agricultural products, accounting for one-tenth of the world's total farm produce trade.

Noting that China's population is 1 billion more than that of the United States while its arable land is about 66.7 million hectares less, Zhang Yansheng said the two countries have broad space for agricultural cooperation and expanding imports will help fill the gap in China's domestic supply.

"They also comply with the existing Chinese laws and regulations as solid progress has been made in intellectual property protection in recent years," Zhang Yuejiao said.

China's efforts to strengthen intellectual property protection aim to create a more enabling business environment for all enterprises including U.S.-funded firms and protect the legitimate rights and interests of all market entities, said Gao Lingyun, stressing that the U.S. should also provide protection of the same level to Chinese enterprises.

Under the agreement, China and the United States will be committed to providing fair, effective and non-discriminatory market access in sectors including banking, securities, insurance, electronic payment and financial asset management.

"China's commitments regarding financial services are consistent with the independent and orderly opening up of its financial sector in recent years," said Cheng Dawei, a professor with the Beijing-based Renmin University of China.

Both sides also agreed to respect each other's autonomy in monetary policy in accordance with its domestic law, recognizing that flexible exchange rates where feasible can serve as a shock absorber.

Ding Zhijie, director of the Foreign Exchange Research Center of the State Administration of Foreign Exchange, said that the deal was a result of consultation with mutual respect, reflected a consensus on multilateralism and provided a model of exchange rate policy coordination between major countries.

The deal stipulates that the two countries shall refrain from competitive devaluations and not target exchange rates for competitive purposes, including through large-scale, persistent, one-sided intervention in exchange markets.

Experts said they believe the text effectively offers an agreed definition of currency manipulation. Cheng Dawei said Washington's dropping its wrongful accusation of China as a currency manipulator helped clear the way for the signing of the agreement.

Since both sides announced their agreement on the text of the phase-one deal on Dec. 13, global economic and financial markets have responded positively. Analysts expected the deal to further boost market expectation, restore confidence and stabilize the financial markets in both countries and across the world.