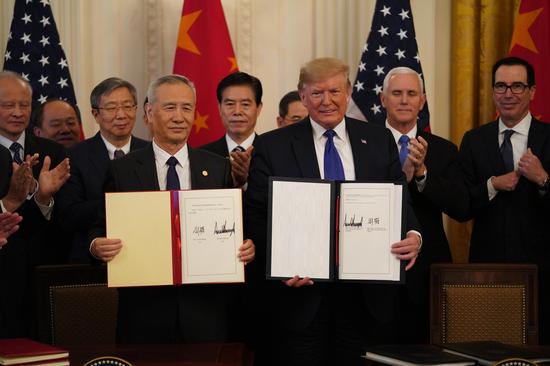 China and the United States on Wednesday signed their phase-one economic and trade agreement that both sides said benefits each other and the whole world, a progress welcomed by businesses, investors and observers.

It "shows that our two countries have the ability to act on the basis of equality and mutual respect, and work through dialogue and consultation to properly handle and effectively resolve relevant issues," Chinese President Xi Jinping said in a message to Trump read out by the vice premier at the signing ceremony.

The deal is a hard-won phased outcome for the U.S.-initiated trade tensions with China, and the progress shows that the world's two largest economies are seeking a more rational way to break the deadlock and inject positive energy into the stability and development of the world economy.

The Chinese vice premier, in his remarks at the signing ceremony, called the agreement mutually beneficial and of win-win nature. "It will bring about stable economic growth, promote world peace and prosperity, and is in the interest of the producers, consumers, investors in both countries," he said.

Liu, also a member of the Political Bureau of the Communist Party of China Central Committee and chief of the Chinese side of the China-U.S. comprehensive economic dialogue, told a briefing with the Chinese press later that day the phase-one deal has to a large extent addressed the concerns of both sides.

The agreement ranges from expanding bilateral trade in such sectors as agricultural products, manufactured goods, energy, and service, further broadening market access, to enhancing the protection of intellectual property rights.

The two sides also agree to establish a bilateral mechanism for two-way assessment and dispute settlement, and the United States has pledged to cancel some of its additional tariffs on Chinese products, marking a policy change from hiking to cutting additional tariffs.

At the signing ceremony, Liu noted that the phase-one deal is in line with the World Trade Organization rules, and that it is neither directed at nor will affect the lawful rights and interests of any third party.

For his part, Trump called the signing of the phase-one deal "remarkable," which is a boon to the United States, China, and the whole world.

The phase-one deal, expected to bring mutual benefit to industries, businesses and consumers of both nations, is well received by U.S. analysts, business and farming communities and financial markets.

U.S. Chamber of Commerce CEO Thomas Donohue said in a statement released Wednesday that this deal provides "much needed certainty" to U.S. businesses as they begin the new year.

"We commend both governments for staying the course and taking this important step to rebuild trust and restore some stability in the world's most important commercial relationship," Donohue said.

Noting that there's a lot of excitement in the U.S. business community, U.S.-China Business Council President Craig Allen told Xinhua in a recent interview that the agreement is good for both the Chinese side and the U.S. side.

Rick Kimberley, president of Kimberley Farms Inc. in the U.S. State of Iowa, told Xinhua he is "pleased" to see that the phase-one deal has been signed, calling it definitely a step in the right direction.

In a recent interview with Xinhua, Tyler Stafslien, a North Dakota-based soybean farmer, said the signing of the phase-one deal signifies to him that "the United States and China are on a path back towards more normalized trading."

David Dollar, a senior fellow in the John L. Thornton China Center at the Brookings Institution, told Xinhua that "markets are relieved that the phase-one deal means that the U.S.-China trade war is not escalating," adding that 2020 looks set to be a more stable year in terms of trade policy.

U.S. markets closed at record highs Wednesday after the signing of the widely-anticipated trade deal, with the Dow Jones Industrial Average ending the trading day at 29,030.22.

The signing of the deal is a positive first step for resolving the economic and trade issues between the world's top two economies, and the priority now is to implement the deal, and get off to a good start for China-U.S. economic and trade ties.

In the next step, the two sides need to implement the agreement in real earnest and optimize its positive impact, so as to make even greater progress in China-U.S. trade and economic cooperation, Xi said in his message to Trump.

Speaking at the signing ceremony, Liu expressed the hope that both sides will work together under the principle of equality and mutual respect, strictly honor the agreement, accommodate each other's core concerns, and ensure a good implementation of the phase-one trade agreement.

"It is the pressing need and will also play an important role in the growth of bilateral economic and trade relations in the future," he said.

Robert Kuhn, chairman of the Kuhn Foundation and a leading U.S. expert on China, told Xinhua on Wednesday that the deal is a "milestone" in international trade and China-U.S. relations.

The phase-one deal "does not solve all problems forever, but by providing stability for China-U.S. economic relations, it does give the entire world greater economic confidence and increases opportunities for global prosperity," he said.

"I am confident that both sides will adhere to the deal," Kuhn said.

President Xi has said that there are a thousand reasons to make the China-U.S. relationship work, and no reason to break it, Liu noted at the press briefing.

The two countries have a lot of shared interests, and can certainly find a way to manage their differences and engage in win-win cooperation, Liu said.