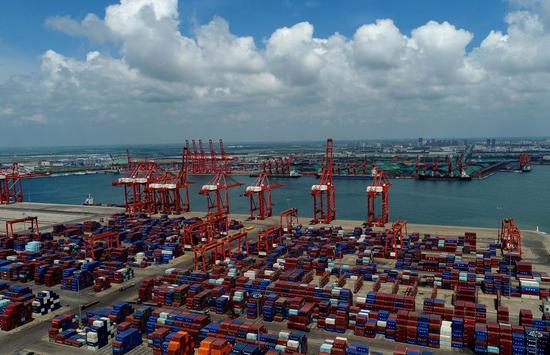 The Chinese economy slowed down in the third quarter, but it is no cause for panic.

Although the country's gross domestic product (GDP) growth cooled down to 6 percent in the third quarter, the figures should be read with calmness and composure.

Amid trade tensions and the country's transition from a phase of rapid economic growth to high-quality development, it was a good result and in line with the basic law of economic development.

The country's economic structure was improved in the first three quarters. Consumption continued to be the mainstay in driving up demand, contributing 60.5 percent of the economic growth in the period.

The output of the service sector, which accounted for 54 percent of the total GDP, rose 7 percent in that period, contributing 60.6 percent of the country's GDP growth.

Meanwhile, a series of policy measures to stabilize employment has been taken. In the first nine months, 10.97 million new jobs were created in cities and towns across the country, which means 99.7 percent of the target for the whole year has been met.

Also, in the first three quarters, more than 100 foreign enterprises were born in China every day, and about 2.5 billion yuan (354 million U.S. dollars) of foreign investment flowed into China daily. Amid the downturn in global transnational investment, foreign investors have cast a vote of confidence in the Chinese market.

The more external uncertainty exists, the more efforts should be made to cultivate internal certainty. The implementation of a series of measures to deepen reform and open wider to the outside world is a powerful guarantee for the constant accumulation of certainty.

China's economy has the resilience, the potential and the momentum to flourish. If China does its own thing well, it can turn pressure into impetus and move steadily and vigorously toward high-quality development.