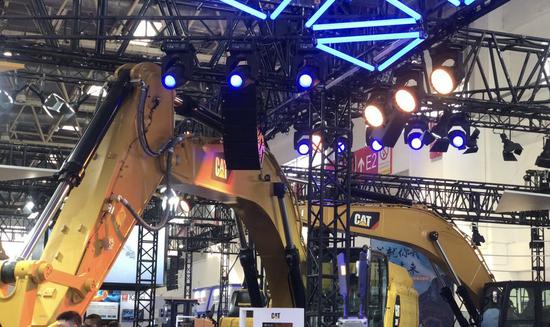 Photo taken on Sept. 4, 2019 shows the new products of Caterpillar at a press conference held at the new venue of China International Exhibition Center in Beijing, capital of China. (Xinhua/Zhang Zhaoqing)

The trade conflict between the United States and China is "counterproductive" and the two countries should cooperate for mutual benefit, said a U.S. observer.

Nothing has been accomplished on a long-term basis in the trade tensions, Peter Walker, a McKinsey senior partner emeritus, told Xinhua in a recent interview. "It is counterproductive and any economist would say the same thing."

"It's a lose-lose," said Walker, also a long-term China watcher.

While pointing to the consequences of escalating tensions on the American economy, the U.S. expert said he is confident in the resilience of the Chinese economy.

Meanwhile, the China-proposed Belt and Road Initiative will give it "a great deal of options to deal with the rest of the world," added the observer.

Citing Washington's imposition of additional tariffs on Chinese imports as an example, Walker said the challenge is a lack of knowledge about China on the U.S. part.

"The United States ... basically said we are imposing unilaterally the following tariffs on you, and if we don't like the way you respond, we are going to put on even more tariffs," he said.

"If you know anything about Chinese history and culture," he added, "you would never (be) going to a discussion with that kind of a mindset."

Describing the idea of asking U.S. manufacturers to change their supply chains based in China as "totally unrealistic," Walker said he believes most American people do not share the point of view that the trade war is a good thing for America.

"These two successful countries ought to be cooperating whatever they can on issues of mutual interests ... and create a win-win on both sides," he said.