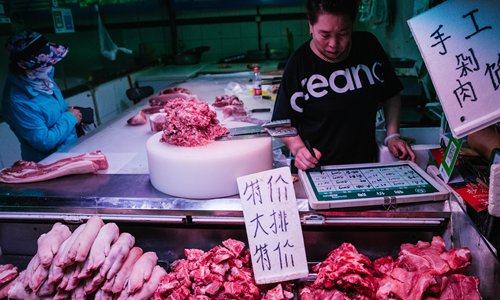 The answer to the question "what is the most admirable job in China" could now be "pig farmers," as they can profit about 1,500 yuan ($209.44) a pig. Two pigs make more profit than selling a car.

The country's pork prices have jumped to one of the record highs in recent months with an outbreak of African swine fever (ASF).

The soaring pork prices have led to market speculation that China, the world's largest pork consumption market, could see looming inflation that threatens the stability of its economy.

After seeing measures rolled out by the Chinese central government in support of pig breeding and market supply, Chinese industry insiders and observers all expressed confidence in the country's ability to stabilize pork prices and run an economy in a sound and stable manner.

On the supply side, the number of pigs sank 32.2 percent year-on-year in July in 400 counties being monitored, according to data released by the Ministry of Agriculture and Rural Affairs (MARA).

"The pig could also become an alternative unit of currency," posted lishamener, a Weibo user.

In Nanning, capital of South China's Guangxi Zhuang Autonomous Region, regulators have imposed a new policy that gives buyers a "coupon ticket" to ration low-price pork, with similarities to the state food coupons before 1980s when basic necessaries were in extreme shortage.

Under the new policy, each resident can buy only up to 1 kilogram of pork a day at a price 10 percent below the average market price over the previous 10 days, according to the local Nanning Evening News. The regulation took effect on Sunday.

Ahead of the upcoming Mid-Autumn Festival next week and the National Day holidays in October, some worried that a widened gap between supply and demand could push pork prices up further and shore up pressure on the economy.

Jiao Shanwei, a veteran agriculture analyst, predicted that pork prices will "rise slightly" for some time but the trend would reverse before the Spring Festival holidays next year after the central government launched intensive "property market-like" curbs to stabilize prices.

"Pork accounts for about 80 percent of China's meat consumption," Jiao told the Global Times on Wednesday. "It also serves as a key indicator for other meat prices such as beef, chicken and mutton. So rises in pork price will definitely weigh on the consumer price index (CPI) and subject the economy to potential inflation risk for the rest of the year."

On Tuesday, the ministries of finance and agriculture issued joint measures, including subsidies for farmers whose pigs were killed due to ASF, expanding loans to pig farms and increasing incentives for large pork producers.

The policy boon, combined with a promising market return, has prompted Chinese pork farmers to re-invest in the industry and expand capacity.

Li Pengfei, owner of a pork farm based in Huaibei, East China's Anhui Province, who has worked in the industry for over a decade, told the Global Times on Wednesday that he has already invested in a new farm for 40,000 pigs. His current farm has 5,000-6,000.

Another pig farmer in Xingtai, North China's Hebei Province surnamed Li said the profit had hit about 1,000 yuan a hog, up from 200 yuan to 300 yuan a hog last year, which bolstered his confidence after the fever.

Wang Zuli, an expert under MARA told the Global Times Wednesday that China has the ability to gradually make up market vacancy and stabilize prices by "expanding pork imports and releasing frozen pork."

China's Ministry of Commerce hinted last week that it would put frozen pork from the state reserve onto the market at "a proper time."

Since April, about 29 provinces across China have issued up to 2 billion yuan in subsidies to 80 million people in extreme poverty to tackle pork price hikes, the Beijing-based China Times reported.

"The impact of short-term supply gap on consumers is controllable and China's economy will ultimately sail through it and operate in a healthy way," Jiao said.