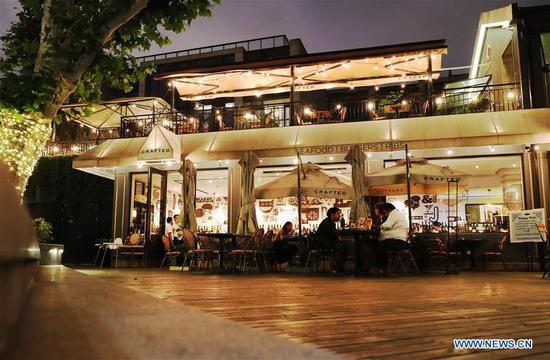 Customers enjoy dinner at a restaurant in the Yong Ping Lane of Xuhui District, east China's Shanghai, May 27, 2019. (Xinhua/Fang Zhe)

On the 97-year-old Hengshan Road in downtown Shanghai, there is a small gate that can be easily missed. When people walk through it at night, they will be fascinated by a complex of elegant buildings bathed in soft yellow lighting.

With more than a dozen restaurants, cafes and boutiques, the 9,600-square-meter complex, called Yong Ping Lane, is a rather new nightlife destination frequented by both Chinese and foreigners.

This is a glimpse of the booming nightlife in Shanghai and many other "sleepless" cities in China. Many have introduced measures this year to boost the nighttime economy -- business activities between 6 p.m. and 6 a.m. in the service sector.

Apart from Chinese hotpot and American burgers, people can find some of the rarest exotic cuisines at the Yong Ping Lane, including Turkish, Peruvian and Czech food.

"When I opened my restaurant here eight years ago, many people thought I would fail," said Emre Gurel, a Turkish national who came to Shanghai to work for a multinational company 12 years ago. "Now we have a group of regular customers -- half Chinese and half foreigners. They like the food, environment and music here."

A rejuvenation project two years ago made his restaurant part of today's beautiful and vibrant quarter.

"Behind my restaurant, there used to be an area for waste metals and machines," said Emre. "After the project, Yong Ping Lane was created and it suddenly became so beautiful."

"We chose lighter foods, such as Western restaurants and cafes," Leung said. "We don't allow music outdoors. And when designing exhaust systems and where outdoor seats are put, we also tried to minimize disruptions to nearby residents."

In April, the Shanghai municipal government introduced a guideline on promoting the nighttime economy. Measures include the appointment of experienced nightlife business managers as "nightlife CEOs" -- assistants and advisors to officials, in light of the successful experience in megacities around the world.

So far, more than ten people, mostly managers at real estate or retail companies, have been appointed to this job. Clarence Lee, manager of a property development project at Xintiandi, is among them.

Lee said Xintiandi, a landmark area of shopping, eating and entertainment in Shanghai, will provide even richer nightlife by hosting more cultural and social activities.

According to Shanghai's plan, the city will draw up the development plan of the Nightlife Agglomeration Area and add more parking spaces, taxi waiting areas and late night bus services.

Every city should have its own signature feature for nightlife, said Wei Yi, vice president of the America China Public Affairs Institute. "Nighttime consumption is a boost for the economy and provides many job opportunities. The key is to balance the needs of the community with the business sector," said the New York resident who frequently visits Shanghai.

Nightlife is vital to Shanghai's economy as well as its identity, said Chen Wen, principal of leading consulting company Oliver Wyman. The nightlife has long been an important incubator of cultural movements and will continue to provide spaces for creativity and social cohesion, he said.