Can Kung Fu Panda as 'Dragon warrior' save the planet? 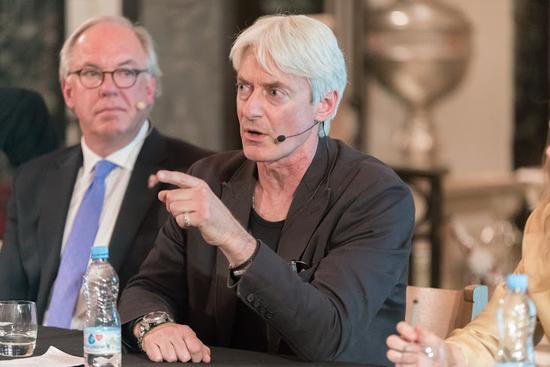 Author calls for green energy as the next business and financial mega trend at a climate conference in 2015. (Photo provided to chinadaily.com.cn)

Can kung Fu Panda as 'Dragon warrior' save the planet?

Editor's note: Laurence Brahm, first came to China as a fresh university exchange student from the U.S. in 1981 and he has spent much of the past three and a half decades living and working in the country. He has been a lawyer, a writer, and now he is Founding Director of Himalayan Consensus and a Senior International Fellow at the Center for China and Globalization.

He has captured his own story and the nation's journey in China Reform and Opening – Forty Years in Perspective. China Daily is running a series of articles starting from May 24 that reveal the changes that have taken place in the country in the past four decades.

The cartoon movie Kung Fu Panda portrays a character who, from his outside appearance, seems uncoordinated because of his enormous size. However, when Kung Fu Panda focuses his determination, he can become agile and swift, surprising everyone by his speed of his action. Sound familiar?

At each stage of China’s economic reforms, it had to step forward away from its sheer weight carried from the past, and its massive population. When its leaders determined to achieve something, somehow the central system of the nation fell in line, and change inevitably followed.

The draft policy document on ecological civilization drafted by myself and Zhu Yanlai was submitted to China’s Ministry of Environmental Protection and also to Li Wei, former personal secretary to Zhu Rongji. Li was now the minister heading the State Council Economic Development Research Center, the foremost economic think tank of the premier. He endorsed the need to expand the still nascent concept of ecological civilization into an elaborated policy that could unlock the perceived contradiction between environmental protection and economic growth.

With his support of this idea, the document and project was taken over by the Ministry of Environmental Protection, where I was soon appointed senior adviser.  Simultaneously to the European Union's Environmental Director General on China's green growth policies under a China-EU Dialogues framework agreement supported research teams involving both European and Chinese energy experts. Why EU’s involvement? Europe has some of the most advanced technology on renewable energy and green finance. However, the population of most European countries is smaller than many of China’s big cities. By combining European technology with China’s scale of production and infrastructural rollout, costs of renewable energy could come down drastically.

Working with the ministry of Environmental Protection Strategic Policy Research Institute, we condensed the Ecological Civilization Sixteen Measures into a five-pillar framework. This framework was not based on any Western model, but rather, on a traditional Chinese matrix called the Five Elements consisting of Metal, Wood, Water, Fire, Earth (Jin Mu Shui Huo Tu). The five pillars include 1) “Earth” state infrastructure investment into renewables and smart transport (the “Great Green Grid”), 2) “Water” fiscal and credit policy to guide businesses in adopting renewable and efficient energy, 3) “Metal” replacing GDP with a broader, more inclusive, set of measures, 4) “Wood” a macro-coordinating policy body to provide a structural framework coordinating genuine green growth among ministries, 5) “Fire” education to transition values toward conservation. Core to the success of this policy transition would be creating a fresh awareness among Chinese people that all things are connected and that we need new measures of success and pride other than material ones.

At the Ministry of Finance, one official commented quite frankly. “China should use economic crisis as opportunity and get rid of outdated enterprises and push green." He then added, "The current generation of government officials knows that this needs to be done. The Great Green Grid is a bigger challenge than the reforms of 1980s and 1990s.”

With carefully guided state policy, things can happen in China quickly. This requires political willpower. As a managed market, ultimately a political decision is required to put in place the right policies that can guide market forces to make wind and solar power competitive with fossil fuels. By 2013, China's new President, Xi Jinping, had officially pronounced the concept of "ecological civilization" and called for quality rather than quantity growth. They wanted to project a non-theory-based pragmatic set of alternatives.

When Rob Parenteau, an independent financial adviser based in San Francisco, heard of the green growth policy proposals underway for China, he wrote the following: "Yes, and with the banking system essentially an extension of their fiscal policy, they [China] have the capacity to drive down the unit costs of production and push out the technological frontier on green tech. Done right, they could end up owning the 21st century industries while correcting their own growth path toward one more sustainable than the current suicidal one. Meanwhile, in the U.S., we will be debating whether we can afford to saddle future generations with the horrible curse of public debt…which is actually an asset held by households… that can help finance the construction and implementation of public assets... that improve the profitability and prospects for the business sector as well as lower future cost trajectories. Solarize all public buildings in the southern half of the U.S. and insulate all government buildings in the northern half, as an opening Green New Deal. Create jobs, teach skills, and scale up demand to drive down unit costs. Or wait until the Chinese own the whole thing.”

Whether in North America or Europe, Asia or Africa, a plethora of renewable energy and energy saving industries will need to replace our old existing systems. With the potential to roll out a spectrum of new employment opportunities for both white and blue collar, in sectors ranging from finance, engineering, environmental science, transportation, and infrastructure.

Does Washington really want change? Does it want to evolve and lead renewable and efficient energy as a mega trend and the next driver of global growth? Or will Washington politicians sit back and let others take the lead as its economy declines further because it is fossilized in old ways and ideological debates?

The problem is that America is locked in a political stalemate that defies rationality. The politics have become like the economics, ideological, not pragmatic, only black and white, without any room for grey. Regardless of which side you take, Democrat or Republican, the result is that views are stagnant and entrenched--one side votes opposite the other side just for the sake of it. It is no longer logical politics, but that kind of vindictiveness that comes about when nobody has an answer but everyone wants somebody to blame. So the strategy is to blame the other side. It has just become an knee-jerk reaction, which means that any form of logic-like, let's try to avoid a crisis rather than just react to another one-is off the game board altogether. Even NiccolòMachiavelli, if he could see this mess, would throw up his hands and tell the Prince to call it a day. There is just nothing you can do with these guys.

So maybe at the end of the day, through ecological civilization, Kung Fu Panda as Dragon Warrior will save the planet. With massive programs for renewable and efficient energy, together with smart transport on a scale never before seen, green energy investments will be the next economic mega trend for the world.