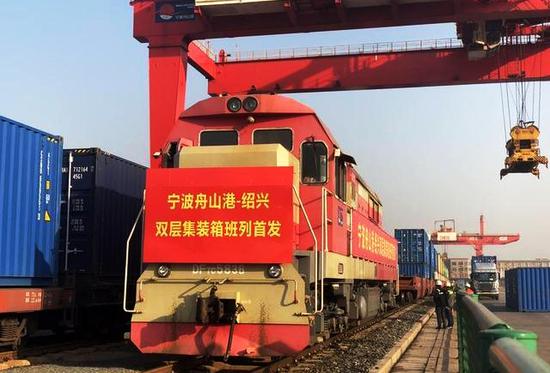 The double-stack train can save transport costs and increase carrying capacity by more than 30 percent compared with the traditional single container train, according to sources with the port.

In each car, one 40-foot intermodal container can be stacked on top of two 20-foot containers in a row, according to China Railway Shanghai Group Co., Ltd.

Through the sea and rail intermodal service, imported goods including mechanical and electrical products, chemicals and building materials can be transported from foreign countries to the Ningbo-Zhoushan Port, the world's busiest port, before reaching the city of Shaoxing.

On the return trip, the containers would carry textiles and other light industrial goods from Shaoxing to the port before being shipped to Europe, the United States and Southeast Asia.

Constrained by infrastructure limitations, only a few countries including the United States, Canada and Australia are operating the double-stack freight trains, according to Zhejiang Seaport Group, the Ningbo-Zhoushan Port's operator.

Strong growth has been posted in the port's sea-rail transport services, which link the port by railway with other parts of China as well as countries in central and northern Asia and eastern Europe. The transport services handled 545,000 standard containers from January to November, a year-on-year increase of 49.36 percent.

Last year, the port registered an annual cargo throughput of over 1 billion tonnes, the world's busiest.