10 foreigners given medals for roles in reform, opening-up 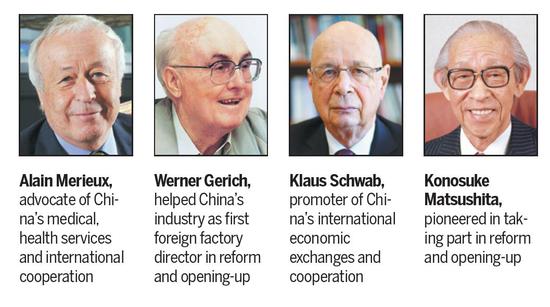 Ten foreigners received China Reform Friendship Medals on Tuesday for their outstanding contributions to the country’s reform and opening-up over the past 40 years.

Founder and Executive Chairman of the World Economic Forum Klaus Schwab was given a medal by President Xi Jinping, together with other recipients at a grand gathering in Beijing to celebrate the 40th anniversary of China’s reform and opening-up.

President Xi Jinping reaffirmed China’s commitment to opening up wider to the world during the gathering.

“The practice of reform and opening-up over the past 40 years has shown that openness brings progress, while seclusion leads to backwardness,” Xi said.

The president pledged to support the building of an open, transparent, inclusive and non-discriminatory multilateral trading system, facilitate trade and investment, and promote more openness amid ongoing economic globalization.

The high-profile conference was attended by Xi and the six other members of the Standing Committee of the Political Bureau of the Communist Party of China Central Committee as well as Vice-President Wang Qishan. Premier Li Keqiang presided over the meeting. 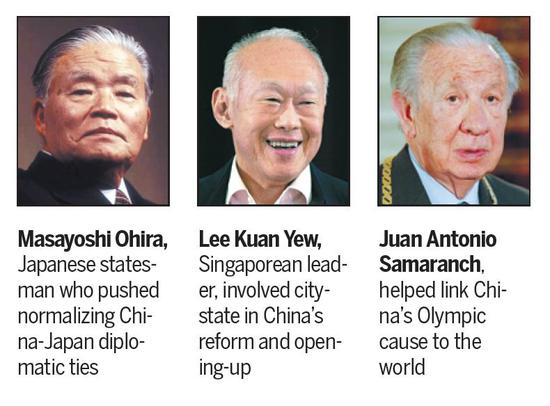 Over the past 40 years, China has recorded an average annual GDP growth rate of around 9.5 percent, contributed over 30 percent to global economic growth and lifted more than 740 million people out of poverty, Xi said, calling the four decades “a glorious process”.

The country will focus on jointly building the Belt and Road with other countries and establish a new platform for international cooperation, Xi said, and will continue measures to boost opening-up.

China’s development provides successful experience and offers bright prospects for other developing countries as they strive for modernization, and it represents China’s great contribution to the progress of human civilization, Xi said.

Wang Huning, a member of the Standing Committee of the Political Bureau of the Communist Party of China Central Committee, lauded the medal recipients as “old friends of the Chinese people” while reading a statement from the CPC Central Committee and the State Council. 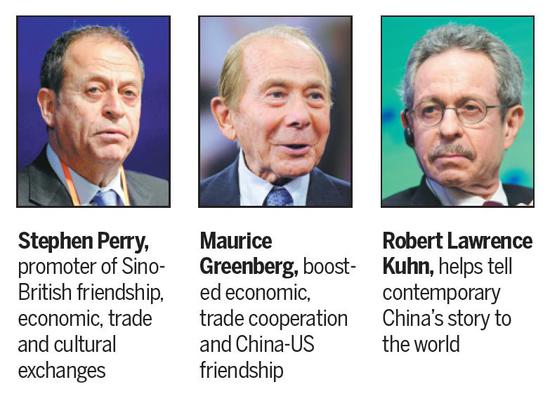 Wang said the 10 foreigners significantly helped promote exchanges and cooperation between China and the rest of the world and were deeply involved in China’s reform and opening-up process.

“They have made outstanding contributions to the country’s reform and opening-up,” he said.

Among the medal winners, Panasonic founder Konosuke Matsushita made great contributions to China’s modernization in electronics through trade and investment.

Lee Kuan Yew, Singapore’s first prime minister and one of the most influential Asian politicians, made contributions by sharing Singapore’s successful governance experience with China.

Juan Antonio Samaranch, former president of the International Olympic Committee, was remembered by many Chinese for his great contributions to China’s return to the IOC.

“The change brought about by reform and opening-up has been incredible,” he said in the foreword.

“In 40 years, China has shifted from a largely agricultural nation with a planned economy to one that is poised to be a leader in the Fourth Industrial Revolution.”

Kuhn, a leading Chinese expert and chairman of the Kuhn Foundation, said it’s a great honor to receive the medal.

“As I look at my participation among the 10 foreigners who have received the China Reform Friendship Medal, I see my role as representing the importance of international communication. It’s not so much personal as it is representing the importance that China places on communication with the world so as to learn about the world and tell the world the true story of China,” Kuhn said in a live report by China Global Television Network.

Conferring the China Reform Friendship Medal on foreigners demonstrates again that China’s reform and opening-up are closely connected with the international community, Ruan Zongze, executive vice-president and senior fellow at the China Institute of International Studies, said in an interview with China Daily.

China’s reform and opening-up drive has won support from the international community, and in the meantime, global peace and development have benefitted from China’s growth, Ruan said.

Ruan added that the 10 medal winners are only a representative sampling of millions of foreigners who have made contributions to the country’s reform and opening-up.