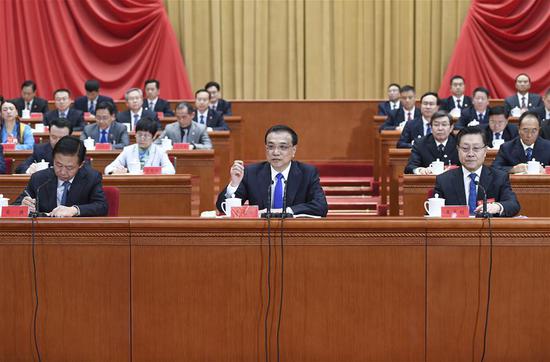 Chinese Premier Li Keqiang (Center), also a member of the Standing Committee of the Political Bureau of the Communist Party of China Central Committee, delivers a report on economic situation during the 17th national congress of the All-China Federation of Trade Unions in Beijing, capital of China, Oct. 24, 2018. (Photo/Xinhua)

China can achieve this year's social and economic development goals as it has seen steady increases in employment and residential incomes while maintaining stable consumer prices amid complex domestic and global conditions, Premier Li Keqiang said on Wednesday.

Li made the remark during a report to a session of the five-day 17th National Congress of the All-China Federation of Trade Unions, which kicked off on Monday.

The Chinese economy is basically stable and performing within a reasonable range, with a strong GDP growth rate in the first three quarters, Li told more than 3,000 participants of the congress. More than 11 million new jobs were created in urban areas in this period.

New technologies and business models were booming along with market vitality, as more than 18,000 new enterprises were registered each day, he said.

Meanwhile, with the economy facing increasing challenges and external risks, growth pressure is rising, affecting market expectations and confidence for many enterprises that had operational difficulties, the premier said.

Li called for a deepening of reform and opening-up, more innovation and an improvement in the business environment, along with an easing of tax and fee burdens.

More measures should be implemented to stimulate markets and tap domestic consumption potential, he said. Problems facing the real economy should be solved and people's livelihoods should be improved to keep economic development in a reasonable range and achieve high-quality development, the premier said.

China has the largest labor pool in the world, giving it huge potential and advantages, Li said. As the nation's education system improves, the quality of the country's labor force has been improving, with an increasing number of high-quality technical professionals, he said. Difficulties can be overcome as long as the enthusiasm and creativity of millions of workers are stimulated, the premier told labor representatives at the congress.

The premier said the legitimate rights of all workers should be ensured. He called for making stable employment a top priority within China's macroeconomic policies, job guarantees for key groups, and a transfer of workers from enterprises in difficulties to other posts.