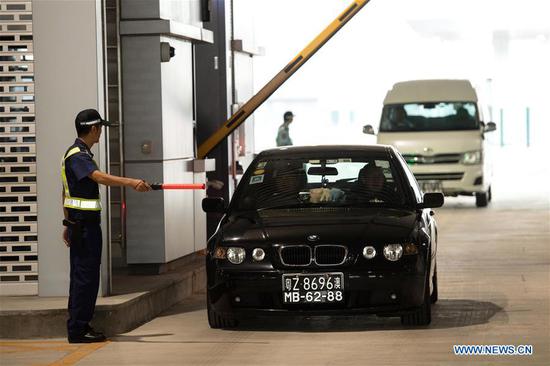 The Macao border zone of Hong Kong-Zhuhai-Macao Bridge (HZMB), the world's longest cross-sea bridge, was put into use as the bridge opened to public traffic on Wednesday morning.

The Macao border zone covers an area of 71.6 hectares, including a six-floor building for customs clearance, two public car parking lots with more than 6,000 slots for private vehicles and another 2,000 for motorcycles, municipal facilities as well as the road network, tunnels and flyovers.

The Macao border zone officially opened at 9:00 a.m. local time (0100 GMT). The passengers went to the departure hall, and passed through the boundary checkpoints via automatic or manned channels. They bought tickets for shuttle buses from Macao to Hong Kong, with cash or by Alipay.

Cross-border services for passengers and vehicles travelling between Macao and Hong Kong are available 24 hours a day.

Meanwhile, passengers going to Zhuhai can use the brand-new "Joint Inspection and One-time Release" channel to pass through the check points.