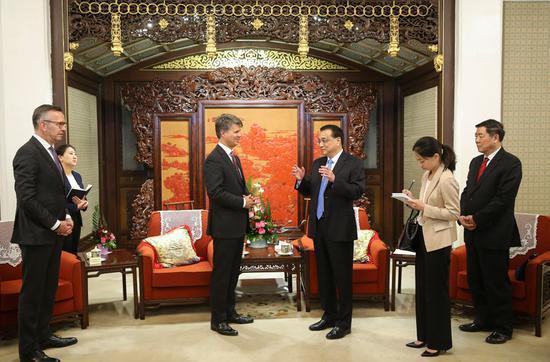 Premier Li Keqiang continues his conversation with Harald Kruger, BMW's chairman of the board of management, at the Zhongnanhai leadership compound in Beijing on Wednesday, after their formal meeting that focused on foreign investment. (Photo by Feng Yongbin/China Daily)

The premier made the statement during meetings with a Japanese delegation, headed by former Japanese prime minister Yasuo Fukuda, and Harald Kruger, BMW's chairman of the board of management.

The German automaker's latest project will be carried out in Shenyang, Liaoning province, making BMW the first beneficiary from China's policy of allowing foreign investors to hold majority stakes in auto joint ventures, Li told Kruger. China has kept its commitment to its new opening-up policies, he said.

In the next step, more endeavors will be made in the opening-up campaign to make China a long-term popular destination for foreign investors, the premier said. Foreign companies, including those from Germany, are welcome to expand their investments, he said.

Kruger said China is the biggest market for BMW, and BMW is willing to take the opportunity of building a new factory in Shenyang to further expand its cooperation with China. Vehicles made in the new factory will be sold globally, including China, he said.

Deepening economic ties is beneficial for both sides, the global economy and international trade, as China and Japan are the second-and third-largest economies in the world, Li said. Both countries should expand their cooperation in trade, investment, finance, innovation and high-tech fields, as well as explore third-party markets and safeguard multilateralism and free trade, he said.

Fukuda and other delegates said that Li's visit to Japan in May promoted getting bilateral relations back on the right track and is appreciated by all circles in Japan, according to a news release. Companies from both countries should conduct frequent exchanges and play a positive role in boosting mutual understanding and expanding cooperation, they said.

Wang said this year marks the 40th anniversary of the signing of China-Japan Treaty of Peace and Friendship. Both sides should strengthen political foundations for their relations and reaffirm their partnership in order to open a new chapter in bilateral ties, he said.

Fukuda said the stable and healthy development of bilateral ties is vital for both countries and Japan is willing to deeply participate in China's new round of reform and opening-up.