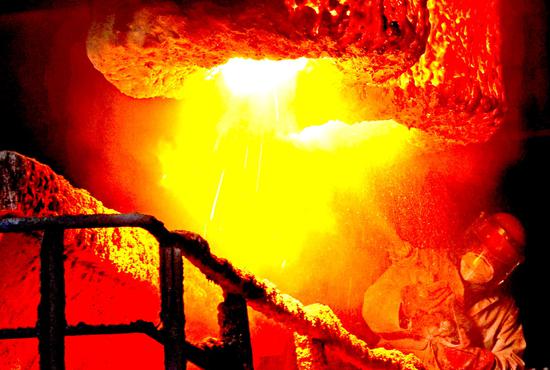 An employee of a steel plant in Dalian, Liaoning Province, works on the company's production line. (LIU DEBIN/FOR CHINA DAILIY)

China is capable of addressing potential risks in the manufacturing sector, as the nation's massive industrial scale and increased innovation capacity give it both the resilience and leeway to maintain sound momentum, said Miao Wei, minister of industry and information technology.

He said despite the ongoing China-U.S. trade tension, "we are confident and capable of dealing with a wide range of risks and challenges, given our strong manufacturing presence and capacity".

In the first eight months of this year, profits of China's major industrial companies grew 16.2 percent year-on-year. Meanwhile, the nation's manufacturing output, which accounted for around 85 percent of industrial value, grew 6.8 percent, faster than expected, according to the National Bureau of Statistics.

"More importantly, the annual growth rate of the high-tech manufacturing sector reached 11.9 percent, and investment in the real economy is rising steadily, giving a strong boost to industrial upgrading," Miao said in an interview with People's Daily.

"China never aims to replace the U.S. in the 10 industrially strategic technologies in 10 years. This is a misunderstanding and overestimation of our strength," Miao said.

He recalled that in 2015, he had made it clear that China still lagged the U.S. by about 30 years in technology, manufacturing development and other areas. "That is to say, it will take around three decades for China to catch up with the U.S., let alone beat it," Miao pointed out.

The two countries are contestants in a competition, but no one should blame the other for running faster. Strengthening cooperation and mutual benefit is a successful experience. It is impossible for any country to succeed by closing its doors and only seek its own development, according to him.

Despite the gap, Miao said China will stick to its original plan and strategies to advance its manufacturing sector by attaching great importance to innovation and the faster deployment of digital technologies in factories and business management.

From January to August, high-value-added industries such as electronics, aircraft equipment and machinery all maintained double-digit growth, indicating a steady improvement in manufacturing value.

"The convergence of IT and manufacturing is giving rise to a host of new business applications. Chinese companies are highly responsive to new technologies. That's exactly what China excels at," Qu said.