Income tax cut to pay off with boost to consumer spending 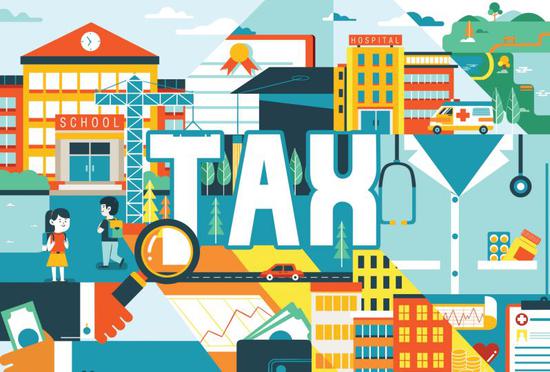 In market economies, tax is one of the most important ways to fine-tune economic development. (Photo by Shi Yu/China Daily)

Xiao Wei works for a leading video-streaming company in Beijing and earns a good monthly pre-tax salary of 40,000 yuan ($5,800 ). His earnings impress friends and family in his home province of Anhui.

However, his net income each month is about 60 percent of what he is paid by his company, partially due to the 25-percent personal income tax. "As a professional in the internet industry, I do earn a good paycheck. But high taxes and rocketing property prices make me reluctant to buy things," said Xiao, 33.

Xiao said the personal income tax should be lowered and allow people to spend more of their hard-earned money. Now his wish may be realized.

The deduction baseline for personal income tax will be raised from the current 3,500 yuan a month to 5,000 yuan on Oct. 1, according to a State Council executive meeting, presided over by Premier Li Keqiang on Thursday. People earning less than 60,000 yuan per year will be exempt from paying such tax. The tax rates will remain the same for up to 45 percent of individual taxpayers.

In addition, special deduction items will be in place on Jan 1; children's education, continuing education, severe illness expenses, interest on mortgages and rent. Consequently, the personal income baseline should be higher than 5,000 yuan, a statement released after the meeting said.

Meanwhile, responding to online rumors that social security expenses will be raised following the adjusted income tax baseline, the meeting decided that all social security policies will remain unchanged to ensure no more burden is placed on enterprises and residents.

The meeting was the latest government move on income tax. On Aug 31, the Standing Committee of the National People's Congress passed an amended law on income tax, the fourth such amendment, approving raising the income-tax baseline.

Li announced raising the deduction baseline in his Government Work Report in March to NPC deputies, winning their applause.

In market economies, tax is one of the most important ways to fine-tune economic development, Li said at the executive meeting, adding that adjustment of taxes is closely related to corporate activities and people's lives. "Under the complicated scenario of the international and domestic economies, we should take stronger measures to reduce taxes, sending a positive signal to society. It's also to decrease the financial burdens on enterprises and improve China's competitiveness," he said.

Li also called for a targeted plan on the six special deduction items, which should be adjusted as the national economy grows and people's living conditions improve.

Under the new tax regime, Xiao will pay 5 percent less in income tax each month, saving him about 2,000 yuan per month.

For Xiao and his colleagues, the State Council meeting sent a clear signal that the personal income tax will be lowered with no higher social security expenses, as most residents expected. It means the net income will probably be higher than the current, which gives him more confidence to buy an apartment and spend more on daily consumption.

That was echoed by some experts, who said the move will increase personal incomes, stimulate market vitality and boost domestic consumption.

Regional differences and a simplified process should be taken into consideration when it comes to the special deduction items, said Zhang Bin, a researcher of the National Academy of Economic Strategy at the Chinese Academy of Social Sciences. Policies covering personal income tax should carefully balance high-income and low-income groups, he said. Therefore, an adjustable plan should be made for the special items, he said.