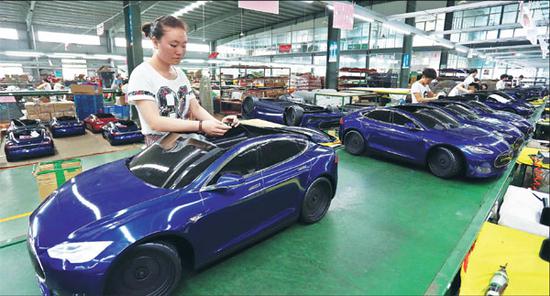 Workers assemble toy cars on a production line in a factory in Jinjiang, Fujian Province. (Photo provided to China Daily)

Proactive fiscal policy will be used further to cut taxes and fees, help ease financing difficulties for small and micro businesses and support the real economy, Vice-Minister of Finance Liu Wei said at a media briefing on Thursday.

At the briefing, which was hosted by the State Council Information Office, Liu said policies will focus on tax reductions to support the development of small and micro enterprises and boost innovation, entrepreneurship and employment.

The briefing followed a State Council executive meeting, presided over by Premier Li Keqiang on Monday, at which macroeconomic policies were pushed forward, together with better use of fiscal tools to serve the real economy and achieve stable growth.

The Government Work Report delivered by the premier in March set China's fiscal spending for this year at 21 trillion yuan ($3.1 trillion) and set a deficit target of 2.38 trillion yuan.

From January to June, revenues for central and local governments reached 10.4 trillion yuan, up 10.6 percent compared with the same period last year, according to the Ministry of Finance.

The proactive fiscal policy has been fully implemented, with stronger support in key areas, and has made achievements in support of the real economy, Liu said.

Taxes will be further reduced, the vice-minister said, and policies for additional deductions of research and development expenses will be expanded to all enterprises.

Under the previous rule, a small or medium-sized technology company could deduct 150 percent of its R&D expenses. Under the new rule currently in effect, all companies, large and small, can deduct 175 percent of their R&D expenses. The change means 65 billion yuan less will be paid in taxes this year.

A national financing guarantee fund will be established to help ease the difficulties of small and micro businesses in securing financing. In the first phase, 60 billion yuan will be injected into the fund to support 150,000 of these businesses each year with new loans of 140 billion yuan, Liu said.

Rewards will be granted to local governments that help expand financing guarantees for small and micro businesses and reduce their costs.

He added that more than 300 billion yuan of such bonds were issued in the first half of this year.