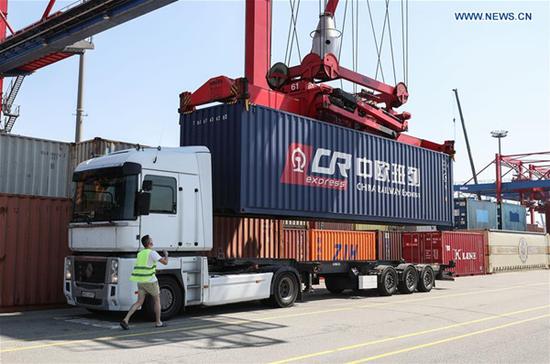 A cargo container of China Railway Express train is loaded on a truck at Eurokombi terminal in Hamburg, Germany, on May 29, 2018. (Xinhua/Shan Yuqi)

Forging ahead or losing ground amid headwinds stemming from escalating U.S. trade protectionism?

As two major forces in the world, China and the European Union (EU) should jointly safeguard the purposes and principles of the UN Charter, improve global governance, and advocate an open world economy, Chinese State Councilor and Foreign Minister Wang Yi said recently in Brussels.

In the face of the United States' imposition of tariffs on steel and aluminum, China and the EU share the similar stance of safeguarding the multilateral trading system, which underpins the global economic growth.

The European Commission, the executive arm of the EU, announced Wednesday that it would start applying the rebalancing duties on U.S. products in July as part of the "three-pronged response" including the launch of legal proceedings against the United States in the World Trade Organization (WTO) and the possible actions aimed at protecting the European market from disruptions caused by the diversion of steel from the U.S. market.

"We regret that the United States left us with no other option than to safeguard EU interests," EU trade commissioner Cecilia Malmstrom said.

Still, the door to trade negotiations would never be closed eternally, in view of the fact that unilateralism and protectionism are neither able to "protect" anyone in the interrelated global economic and trade system, nor in line with the fundamental interests of people in any country who pursue sustainable prosperity and well-being.

Against that backdrop, China and the EU, both are the victims of U.S. trade protectionism, comprehensive strategic partners as well as firm supporters and active participants of multilateral free trade, are expected to collaborate more closely to anchor world trade in line with the free and fair principle.

A CHORUS OF TRANSATLANTIC CRITICISM AGAINST U.S.

It was not much unexpected that U.S. President Donald Trump announced by the end of last month to impose punitive tariffs on steel and aluminum imports from the EU. Equally unsurprisingly, the tariff which came into effect since June 1 has drawn a chorus of criticism in Europe, where rage, anxiety, deep concern over further trade barriers on imported cars overshadowed political and economic activities.

In a statement, European Commission President Jean-Claude Juncker lambasted U.S. tariffs, stressing that they are "protectionism, pure and simple".

Germany, the largest economy in Europe, rejects the U.S. measure.

"The German government rejects the tariffs imposed by the U.S. on steel and aluminum. We consider this unilateral measure to be illegal; the cited grounds of national security do not stand up," German Chancellor Angela Merkel's spokesman Steffen Seibert said in a statement.

"There is no point denying that the U.S. now has put a bomb under the global trading system." Fredrik Erixon, director of the European Center for International Political Economy, a Brussels-based think tank, told Xinhua.

The excuse for imposing the tariffs, namely "America First," was "far-fetched," said Volker Treier, foreign affair specialist with the German Chambers of Commerce and Industry (DIHK). Treier criticized the penalty duty as an "outmoded" instrument in the 19th century, incompatible with a time of globalization and digitalization.

Gabriel Felbermayer, trade expert at the Ifo institute in Munich, warned that the development was likely to signal a looming "cold war" between Europe and the United States over trade.

While economic damage would be "limited" at first, Felbermayer said, it had to be worried that the steel and aluminum tariffs were "only the beginning of a row of further U.S. measures."

In spite of countermeasures adopted to hit back against the United States, European policymakers and economic communities are well-versed in the lose-lose consequences of a trade war.

"The measure risks touching off spirals of escalation in the end hurt everyone," Merkel warned.

In Germany, around 25 percent of jobs depend on exports. Open markets are therefore especially important for the "core" country within the EU.

"It's sure that in the vicious circle of tariffs, sanction and retorsion, there will only be losers: U.S. customers, German, European, and American companies, as well as the trust based on the established international rules," President of DIHK Eric Schweitzer said.

Aluminum and steel are both important resources for German carmakers. For Germany's largest carmaker of Volkswagen, there would only be losers from a trade war.

The Wolfsburg-based group called for a program of mutual tariff reductions as outlined in plans for the Transatlantic Trade and Investment Partnership (TTIP), a nascent EU-U.S. free trade agreement. But talks of the deal were frozen after Trump took office.

The more chaos and uncertainties Trump's protectionism has been stirring up worldwide, the more resilience and perseverance the open and fair trade system is needed to bring about. In this regard, China and the EU have abundant reasons to join hands to preserve multilateralism, globalization and free trade.

Meeting with Juncker last Friday in Brussels ahead of the 20th EU-China summit, Wang said that as two major forces in the world, China and the EU should jointly safeguard the purposes and principles of the UN Charter, improve global governance, and advocate an open world economy.

The international situation is undergoing complicated and profound changes, Juncker said. In this context, safeguarding multilateralism and free trade are not only at stake for the EU and China, but also for the rest of the world.

Felbermayer recommended that the EU maintain a united front in opposition to the U.S. measure together with other international partners like China, a staunch supporter of multilateral system of fair trade.

China has decided to slash its automobile import tariffs from July 1, pledging to further open up, including increasing imports from the United States, which will benefit both peoples and the rest of the world.

Noting that unilateralism and protectionism are on the rise in the international landscape, Wang reiterated that China and the EU, as two stable forces, should strengthen strategic communication, promote mutual strategic trust, and deepen strategic cooperation.

The two sides should jointly safeguard the purposes and principles of the UN Charter, and safeguard multilateralism and global free trade regime, he said, adding that both sides should make due contributions to tackling global challenges.

Mogherini stressed that the EU is willing to work with China to uphold and strengthen the multilateral system with the United Nations at the core, and the rules-based international order.