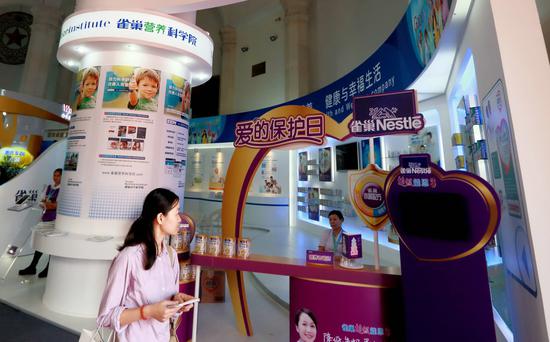 A visitor walks past Nestle's booth at an exhibition of dairy products held in Beijing. (Photo provided to China Daily)

Switzerland-based food and beverage giant Nestle SA announced it has sold a 95 percent stake in one of its Chinese dairy manufacturing facilities to a local player, as it looks to reduce its raw milk powder output in an oversupplied market.

"Over the years, we have built a healthy dairy business with significant investments, and we are committed to developing it further and ensuring that it is sustainable. In line with this strategy, we are shifting to a new business model for our Hulunbuir dairy factory," Nestle said in a statement.

As part of the deal, Nestle will take a 6 percent stake in Ningxia Saishang, a deep processing dairy company that produces cream powder, cheese and other dairy products, and is based in Northwest China's Ningxia Hui autonomous region.

The transaction was completed in mid-May, 2018. The two sides did not reveal the total investment amount behind the deal.

The Hulunbuir factory is the 22nd facility Nestle has set up in China and its fourth dairy manufacturing site in the country. Nestle said it will make efforts to minimize any interim impact and ensure a smooth transition.

"Nestle is shaking off asset-heavy businesses and shifting to asset-light businesses," said Song. "Low temperature yogurt, which is more lucrative, is a current priority for Nestle's dairy business."

"Investment in the raw milk powder sector comes with some risks and companies need to be aware of them," Song said.

Nestle has taken on consumer healthcare as a new growth engine. Its subsidiary, Nestle Health Science's factory in Taizhou, Jiangsu province, will start manufacturing special medical formula food for the Chinese market from next year.

Yan Jianguo, CEO of Saishang, said the company expects to go public in three years. In five years, its profits and revenue are forecast to reach 600 million yuan ($93.98 million) and 3 billion yuan respectively.