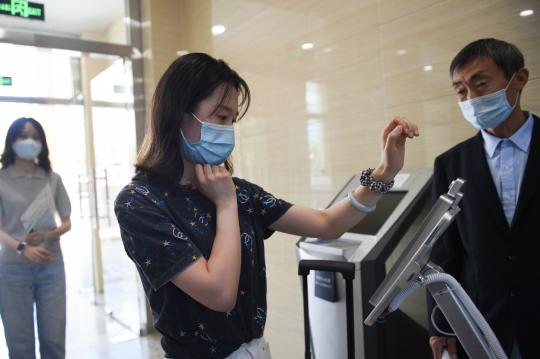 A staff worker at Beijing University of Chemical Technology takes the body tempertaure of a student at the entrance of a teaching building, on May 27, 2020. (Photo/Xinhua)

The mainland reported two new confirmed cases of COVID-19 as of Wednesday and no deaths or suspected cases were found that day, according to a release by the National Health Commission on Thursday morning.

There are four suspected cases from outside the mainland as of Wednesday. The mainland so far has reported 1,734 imported cases of infection, with 1,688 of them released from hospital and no deaths reported.

The commission said on Wednesday eight patients were released from hospital on the mainland, and 368 who were in close contact with confirmed patients were discharged from medical observation. The number of patients in critical condition dropped by one the same day.

The mainland now has 73 cases of coronavirus as of Wednesday, with four in critical condition.

So far, the mainland has reported 82,995 confirmed cases and cured 78,288 patients, while 4,634 patients were killed by COVID-19. There are five people suspected of infection.

The mainland has also traced 743,799 people in close contact with patients confirmed of infection, and 5,641 are still under medical observation.

The commission said 1,552 confirmed cases were reported in the Hong Kong and Macao special administrative regions and Taiwan so far, among which Hong Kong reported 1,066 cases with four deaths, Macao 45 with no deaths and Taiwan 441 with seven deaths.