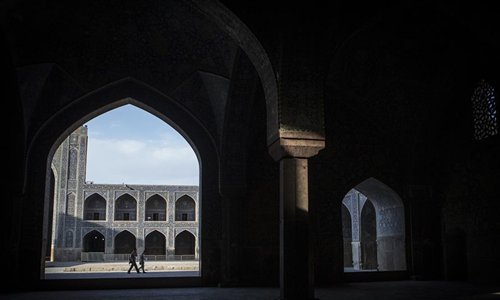 People walk at a mosque in Naghshe Jahan Square in Isfahan, Iran, on July 17, 2019. Constructed between 1598 and 1629, Isfahan is now an important historical site, and one of UNESCO's World Heritage Sites. (Photo/Xinhua/Ahmad Halabisaz)

The International Alliance for the protection of Heritage in Conflict Areas (ALIPH) told the Global Times at a press conference on Wednesday that China has provided the group with financial support globally and is encouraging more expert guidance from Chinese professionals and heritage preservation institutions.

Cultural heritage is often target during armed conflicts. Restoration is an important part of social and cultural reconstruction in the countries involved.

Some countries, such as Iraq and Afghanistan, have suffered from decades of unrest and their culture and heritage have been damaged, said ALIPH Executive Director Valéry Freland.

The move sparked increased concern over the fate of the region's cultural heritage.

As China has advanced technology in bronze, pottery, porcelain, and temple restoration, ALIPH hopes professionals and related institutions cooperate with them to protect heritage sites in conflict areas, Freland said.

China is willing to join other countries to enhance cooperation in fields such as museum management, joint archeology, high technology development, and training of professionals, Hu Bing, deputy director of the NCHA, said at a cultural heritage forum in April.

China has assisted in repairing and preserving cultural heritage sites in countries including Cambodia and Nepal.

China worked with Cambodia in 1997 to help restore the Angkor Wat Temple. Restoration work was also completed on the Chau Say Tevoda Temple and Takeo Temple, Chai Xiaoming, president of the Chinese Academy of Cultural Heritage, told the Global Times in an earlier report.

After an 8.1-magnitude earthquake struck Nepal in 2015, China sent experts to assist with post-quake damage assessment efforts at cultural heritage sites in Kathmandu.