Hainan film festival lift its curtains on Sunday in Sanya 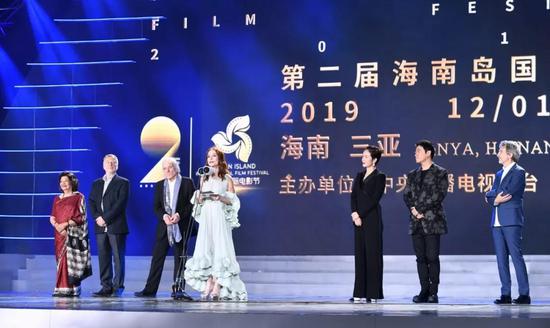 Co-hosted by China Media Group (CMG) and the provincial government of Hainan, under the guidance of the China Film Administration, Shen Haixong, president of CMG, announced its opening at the grand evening gala.

"Hainan's development is an important witness to China's reform and opening-up over the past four decades. CMG will strive to create more films with profound ideas, exquisite art and excellent production with the spirit of excellence, meticulousness and pursuit of perfection," Shen Haixiong said, calling on global film industry insiders to work together to develop the Hainan Island International Film Festival.

This year marks the 70th anniversary of the founding of the People's Republic of China. A special section titled "A tribute to the 70th anniversary" was presented at Sunday's evening gala. Eleven Chinese artists recalled the development of China's film industry over the past seven decades.

Launched in 2018, the Hainan Island International Film Festival is the youngest international film festival in China. The handshake of the trophy's main body is a coconut tree with lush palms, symbolizing the natural growth of light and shadow. The fruit in the center of the crown represents the award-winning works, considered amazing achievements by many in the film industry.

A total of 1,495 films from 80 countries have signed up for the festival, according to the organizer.

This is the first year organizers are giving out "Golden Coconut Awards" for feature films, documentary films and short films, as well as a specially established "Best Children's Film" award.

A total of 10 awards to encourage the contributions made by all filmmakers both on and off the screen will be unveiled at the closing ceremony on December 8.

The Hainan Island International Film Festival will also make full use of the beach landscape of Hainan Island and creatively open free "outdoor beach screening" to the public. It plans to conduct island-wide film tours throughout the year, which is innovative and artistic.